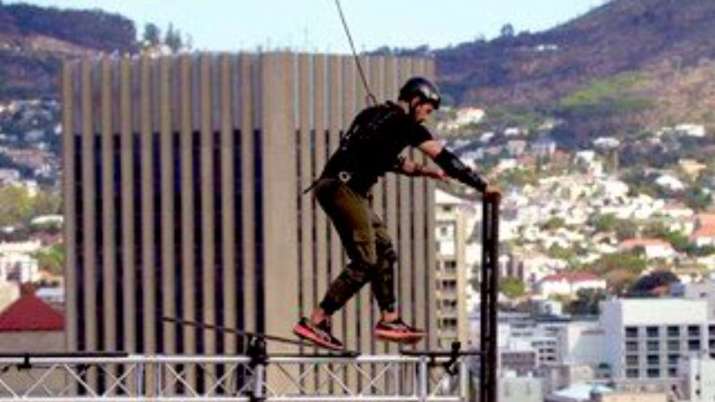 The adventure based reality show Khatron Ke Khiladi 11 has finally starting siring on television. Fans have been excited about the Rohit Shetty hosted show ever since the contestants flew to Cape Town, South Africa in May to shoot for it. Big TV names like Divyanka Tripathi, Rahul Vaidya, Arjun Bijlani and others are part of the current season. As the show began its journey on TV on Saturday at 9:30 pm, netizens are in awe of Divyanka Tripathi and Abhinav Shukla for acing their first stunts. Some are even speculating that the winner of the show this year can be Rahul Vaidya or Divyanka Tripathi.

Lauding Divyanka, one Twitter user wrote, “She’s fabulous man.. The way she has done it..#DivyankaTripathi Magar Rani.” Another said, “Was stunned after watching this stunt.

@Divyanka_T.. Suna hai yeh stunt ke baad wo crocodile ne suicide kar li sharam ke maare. ” “Highlight of today’s episode – #DivyankaTripathi, the way she lifted the Crocodile in stunt. My parents were surprised including me that how’s Tv bhaurani be so dhaakad. Honestly, not expected this performance on her first stunts. Reason behind channel called her Magar Rani,” tweeted another.

Talking about Abhinav Shukla, fans were in awe of his patience and strength. One user said, “@ashukla09  Done hi first task in his style….. Like A champ and one halka aadmi wo to hawa ke jhoke se udd gya.. Nalla Bhagoda.” Another tweeted, “DARR VS DARE FT ABHINAV… Yipeeee …. Superb performance Abhinav….. Love you sooooo much… Can’t wait to see more of it”

“So glad that Abhinav Shukla is already getting so much appreciation for his participation in kkk11  and the way he’s been performing in kkk he’s just perfect for KKK ,” wrote one fans.

Host Rohit Shetty, whose calling card on the small screen is hosting the adventure reality show “Khatron Ke Khiladi”, says he is not much of a lover of “Khatra” (danger), though he admits action will always be his first love.

“It’s not that I am in love with ‘khatra’ but I am in love with action,” he said, about what drives him to be a part of the show, now all set to air its 11th season. Rohit returns as host, and guiding the celebrity contestants facing their fears on the show.

“This season is actually special. We have taken the show to a new level, which you will come to know when you watch it. We have made it bigger this time. I have been doing this show for seven years now and the challenge this time was to make it even more engaging,” he said.

“Given that it is an action show, the team in Cape Town (where the new season was shot) was equally overwhelmed and excited,” he pointed out, adding: “I am happy and confident because the energy of the shoot was right and apt. I am waiting for the audience to watch it. Generally, one is scared before the release but this time I am confident and looking forward to it,” sums up Rohit, a name synonymous to action in Bollywood films.