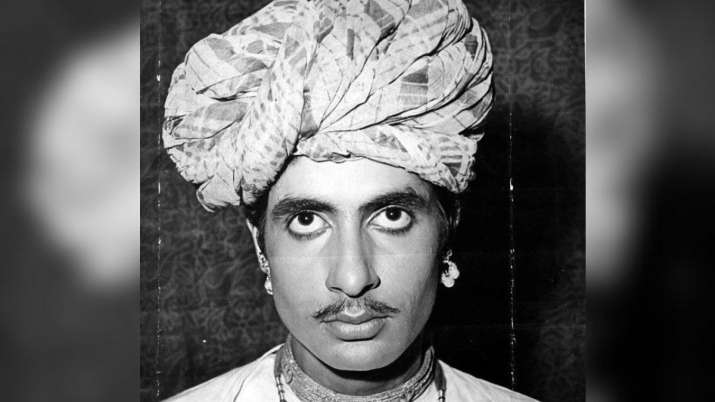 Amitabh Bachchan on Sunday, took a stroll down the memery lane and treated his fans and followers with a rare picture of himself. He shared a picture from his look test for his 1971 film Reshma Aur Shera. Amitabh Bachchan played the role of  Sunil Dutt’s character Shera’s brother in the film. The picture was clicked during his look test for his character Chotu in 1969.

Sharing the picture on his Instagram account Big B wrote in the caption,  “My look test for film ‘Reshma Aur Shera’… 1969 … I actually got selected!”

In the photo that Amitabh Bachchan shared, he can be seen sporting a traditional Rajasthani outfit comprising a pagari (turban), a kurta, studs and a neckpiece. The film was set against the backdrop of Rajasthan.

Big B often shares picture, videos and scoops from his old films. Earlier the actor shared a still from his 1981 film Naseeb. “The matador and the gun… film NASEEB… climax on a rotating Restaurant, a set built at Chandivali Studio and it rotated… so action scenes, drama, Restaurant on fire, all done while it rotated. Only the great Manmohan Desai could conceive all this… and succeed… and we’re talking the 80’s…no VFX no CG nothing… Those were the days my friend,” he wrote in the caption.

Amitabh Bachchan also shared photo from his 1975 film Deewaar. Sharing the picture he also revealed a story behind his look in the film, “… those were the days my friend .. and the knotted shirt .. it has a story .. first day of shoot .. shot ready .. camera about to roll .. and the discovery that the shirt has been made too long – beyond the knees .. director could not wait for another shirt or a replaced actor .. so tied it up in a knot and …”

Amitabh Bachchan’s upcoming slate of work includes ‘Chehre’, ‘Jhund’, ‘Brahmastra,’ ‘Mayday’ and a remake of the Hollywood film “The Intern” coming up, besides an untitled film with Prabhas and Deepika Padukone. Recently, he wrapped up his film Goodbye also starring Rashmika Mandanna and Neena Gupta.

Yogi Adityanath To Remain Boss In Uttar Pradesh As BJP Gears Up For Assembly Elections: Report