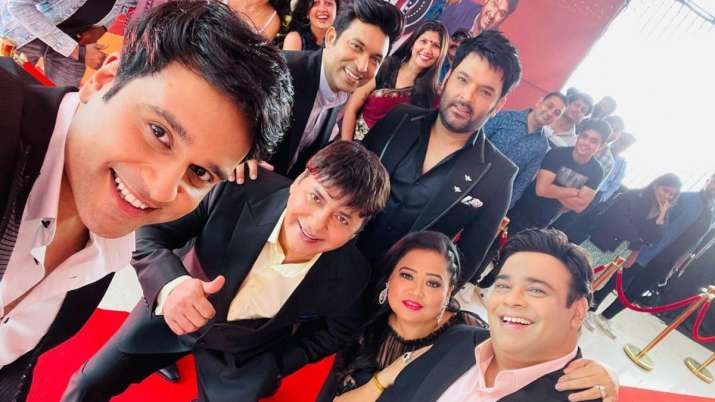 The Kapil Sharma Show is one of the most popular comedy shows in recent times. Hosted by ace comedian Kapil Sharma, it has been going on for quite a long time now. However, it went off air earlier this year when Kapil decided to take a break for his wife Ginni Chatrath, their daughter Anayra and their newborn son Trishaan. There’s a great news for the viewers of the show as Kapil Sharma has started shooting for his comedy talk show ‘The Kapil Sharma’.

The upcoming season of the show will feature Kapil’s old friends and famous comedians Sudesh Leheri, Krushna Abhishek, Kiku Sharda, Bharti Singh and Chandan Prabhakar. On Sunday, Kapil took to Instagram and shared a series of photos with his gang. All artistes can be seen dressed up in black attires.

“new beginning with all the old faces#tkss #thekapilsharmashow #blessings #gratitude #comingsoon,” he captioned the post. After hearing the news, social media users expressed their happiness. “The best show ever is coming back,” a netizen commented. “Wow….was eagerly waiting for the new season,” another one wrote.

Reportedly, the show will make a comeback in August on the Sony Entertainment Television channel. The show will be co-produced by Salman Khan Television (SKTV) and Banijay Asia. When Kiku was asked about the show’s return date, he told the portal that it is not fixed as yet, and “obviously the channel will also make an official announcement when the exact date is locked.”

In March this year, Kapil and other cast members did auditions for new members. He said in a statement, “I am excited and happy to welcome new talent – actors and writers on ‘The Kapil Sharma Show’. Looking forward to meeting like-minded and talented individuals who have the right passion towards entertainment.”

Also read: Kriti Sanon shares her glimpse from the most ‘chubbiest day of Mimi’; see pic

Meanwhile, the actor-comedian is also a part of Netflix show whose details are being kept under wraps.