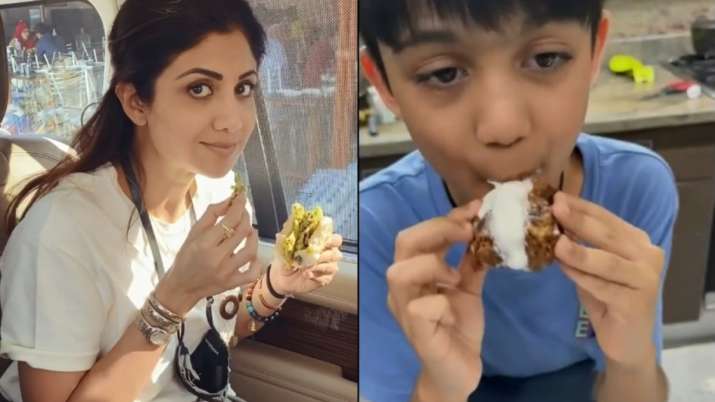 Shilpa Shetty who enjoys a massive set of fanbase for her Sunday Binge videos on Instagram has a new partner now. Shilpa’s son Viaan Raj Kundra took over Sunday Binge segment and left the internet in meltdown as he mimicked Shilpa’s reactions while enjoying a vegan chocolate chip cookies with vanilla ice cream.

Sharing the video Shilpa wrote in the caption, “#sundaybinge with Son on a Sunday Made healthy Vegan choc chip cookies today and filled it with Vanilla icecream . Yummy !! Cookie Icecream sandwich was polished in under a minute Ps: Will post the recipe on Thursday Vegan oatchoc cookie without any refined sugar or flour.”

Shilpa took to her Instagram and  shared a video in which she revealed that the they had baked the cookies at home. Shilpa shot a video of Viaan as he devoured the cookies with a scoop of ice cream. “This is the life,” she’s heard saying behind the camera, while Viaan rolled his eyes and focusing on the cookie, similar to Shilpa’s style when she would record Sunday Binge videos.He also mentioned “Sunday binge”, in his mother’s trademark style leaving Shilpa in splits.

Shilpa Shetty’s ‘Sunday Binge’ segment is popular among her fans and followers. Check out some of the most loved clips here:

On the work front, Shilpa Shetty Kundra recently announced that she will make her digital debut with a series and is excited to see how the audience will receive her in the streaming space. Shilpa is currently gearing up for the release of “Hungama 2”, featuring Paresh Rawal. The Priyadarshan-directed comedy is scheduled to be released on Disney+Hotstar on July 23.

The actor, known to star in films like “Life in a Metro” and “Dhadkan”, said, though the comedy marks her first film in 14 years, her comeback film was supposed to be “Baaghi” director Sabbir Khan’s “Nikamma”. The action-romantic-comedy, also starring Abhimanyu Dassani and Shirley Setia, was pushed due to the pandemic.