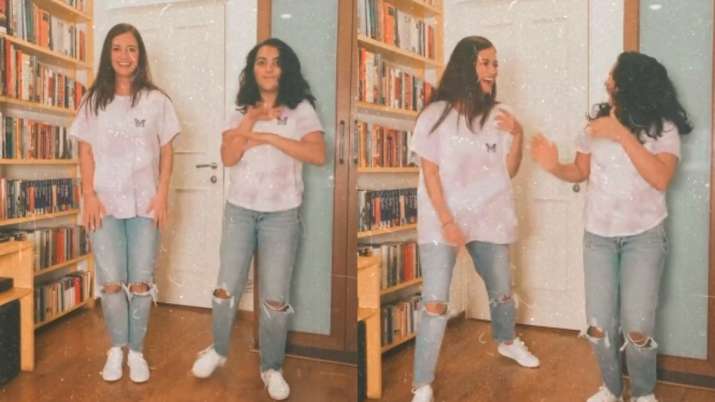 New mom Dia Mirza on Sunday treated her fans to the cutest video. Dia shared a video of herself dancing with her stepdaughter Samaira to the song Iko Iko by Justin Wellington. For the unversed, Samaira is Dia’s husband Vaibhav Rekhi’s daughter from his first marriage. Sharing the fun video on Instagram, Dia wrote, “Sunday Shenanigans with My Bestie.”

In the video, both Dia and Samaira can be seen twining in white tees with ripped blue jeans and white sneakers. The two compliment each other as they dance together.

Soon after Dia posted the video her fans and friend from the industry bombarded the comments section with their sweet reactions. “Haha cuuuuuties,” wrote Soni Razdan and even Bipasha Basu dropped a heart emoji in the comment section.

Rcently, Dia announced the birth of her son Avyaan Azaad Rekhi. In a long post, she shared that her son was born prematurely on May 14. Dia wrote, “To paraphrase Elizabeth Stone, ‘To have a child is to decide forever to have your heart go walking around outside your body.’ These words perfectly exemplify Vaibhav & my feelings right now. Our heartbeat, our son Avyaan Azaad Rekhi was born on May 14th. Having arrived early, our little miracle has since then been cared for by tireless nurses and doctors in the Neonatal ICU.”

“A sudden appendectomy during my pregnancy and a subsequent and very severe bacterial infection could have led to sepsis and proven to be life threatening. Thankfully, the timely care and intervention by our doctor ensured the safe birth of our baby via an emergency C-section,” Dia added.

Dia married Mumbai-based businessman Vaibhav Rekhi in February 2021. This is Dia’s her second marriage. She was earlier married to Sahil Sangha, who was also her business partner. The actress had announced her pregnancy in April writing, “Blessed to be…One with Mother Earth…One with the Life Force that is the beginning of everything…Of all stories. Lullabies. Songs. Of new saplings. And the blossoming of hope. Blessed to cradle this purest of all dreams in my womb.”