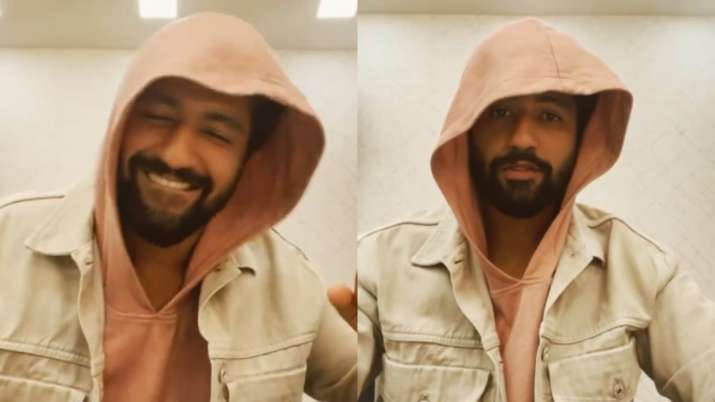 Bollywood actor Vicky Kaushal is an avid social media user. The actor recently treated fans to a goofy video of himself in which he can be seen lip-syncing to ‘Purple Hat’ rap in his vanity van. Taking to his Instagram handle, he dropped a short clip jamming on ‘Purple Hat’ with ease. Posting the video, Vicky wrote, “Felt cute will 100% delete it later. Bohot zor se Acting aa rahi thi.”

His post left many astonished, the video received reactions from many of his friends including Deepika Padukone, who dropped laughing-out-loud smiley in the comment section. Not only, Deepika but Vicky’s video made superstar Hrithik Roshan drop a comment too as he was impressed with Vicky’s newly revealed talent. He commented, “Woah! I like.” Reacting to Hrithik’s, Vicky replied, “@hrithikroshan woah!!! You like. I dead.”

Earlier in the day, Vicky showed off his painting talent too as he shared a picture in which he was seen holding a small canvas that had Lord Ganesha painted over it.

On the professional front, Vicky will be seen in Meghna Gulzar’s upcoming biopic on Sam Manekshaw titled “Sam Bahadur”. He also has the biopic of Udham Singh, titled “Sardar Udham Singh” directed by Shoojit Sircar. The actor will also be seen in the comedy drama “Mr Lele”.

Vicky, who rose to prominence with roles in films like “Raazi”, “Sanju”, “Raman Raghav 2.0”, “Lust Stories” and Anurag Kashyap-directed romance “Manmarziyaan,” recently completed nine years in Hindi Cinema. To mark the milestone, the actor shared a photo from one of his auditions in 2012, when he entered Bollywood. “Today, 9 years back SHUKR!” Vicky wrote alongside the photo on his Instagram story. In the picture, Vicky is seen holding an audition whiteboard wearing a white T-shirt.

With pandemic in mind, pared-back hajj in Mecca for 2nd year