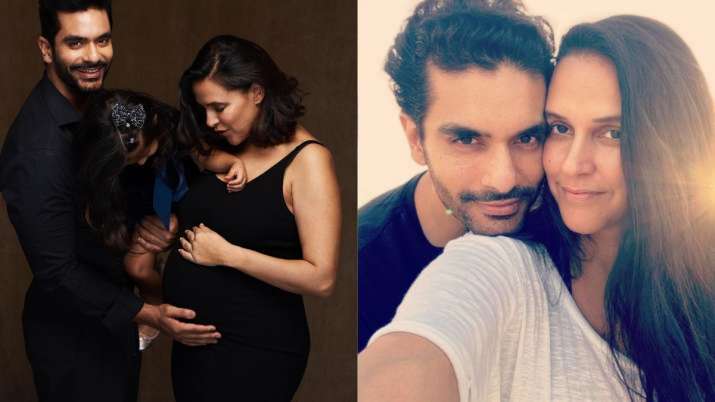 Neha Dhupia and Angad Bedi will soon be welcoming their second child. Taking to social media, the couple announced their second pregnancy. Neha, who is already a mother to three-year-old Mehr shared a beautiful family photo, expressing her joy. The picture shows Neha and Angad caressing her baby bump as the actor hold daughter Mehr in his arm. Neha wrote, “Took us 2 days to come with a caption….The best one we could think of was … Thank you, God.”

For the photoshoot, Neha and Angad are twinning in black. The actress looks beautiful in a black body-hugging dress as she flaunts her baby bump. While Angad looked dapper in a black shirt and trousers.

As soon as they announced the pregnancy, the post was flooded with congratulatory messages and heart emojis. Amitabh Bachchan‘s granddaughter Navya Naveli Nanda dropped several heart emoticons in the comments section.

Meanwhile, Neha Dhupia and Angad Bedi had tied the knot at a Gurudwara in Delhi in May 2018. The couple welcomed their daughter Mehr in the same year.

On the work front, Angad Bedi was recently featured in the biopic Gunjan Saxena: The Kargil Girl, which stars Janhvi Kapoor in the titular role. He played the role of Anshuman Saxena. The film got released on the OTT platform due to the COVID-19 pandemic. While Neha Dhupia was last seen in the short film Devi, alongside Kajol and Shruti Haasan. She features as one of the gang leaders on TV reality show Roadies Revolution.

Also Read: Kartik Aaryan gears up for his next movie, drops post-workout beefed-up picture from gym

Kartik Aaryan gears up for his next movie, drops post-workout beefed-up picture from gym