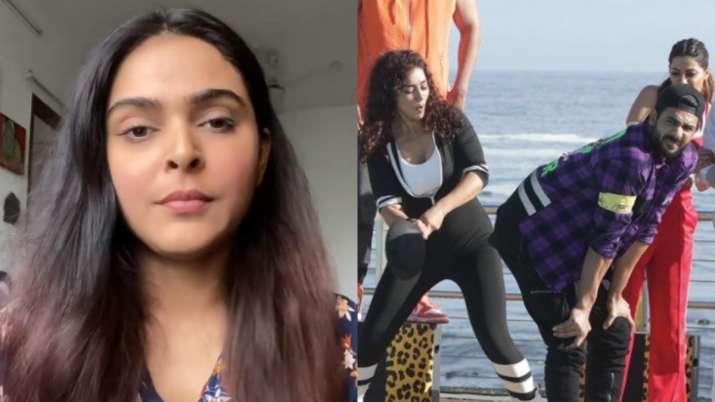 Bigg Boss fame Madhurima Tuli on Monday took to Instagram and slammed the Colors TV and Khatron Ke Khiladi 11 for recreating the ‘frying pan scene’ on the show with her ex-boyfriend Vishal Aditya Singh. The actress said that she is disappointed that the makers keep recreating that particular incident that happened in the Bigg Boss house, without considering her emotions.

Calling her video a ‘humble request to @colorstv’, she wrote, “Dear @colorstv My Mom is crying since morning, she has Diabetes issues and was hospitalized earlier due to the same incident. You guys don’t know a single thing about my personal relation with the person that incident happened.”

“Every single relation in the house was poisonous and everyone has done mistakes in the same house. Please let me move on. Its a request, please consider this video a humble request to not play with my family’s emotions again and again.. Thank you,” she added.

The actress revealed in the video that she never wanted to make this video but was not left with much of a choice. “You are using this one incident for your TRP and gain without realising it is affecting other people or their families. They are getting depressed or affected. They want to put this one incident behind them but you are not letting them do that,” she said. She also said that she is being targeted by the channel because she has a limited fan following and no one will stand for her.

She concluded the video saying that if the channel wants to highlight this particular incident is their choice but then they should showcase other unpleasant incidents as well that took place in the house with other contestants.

Even Netizens were miffed with the makers for recreating the scene in Rohit Shetty‘s show. Check out fans reactions:

Maharashtra rains: 5 of family dead as boulder crashes into slum in Thane