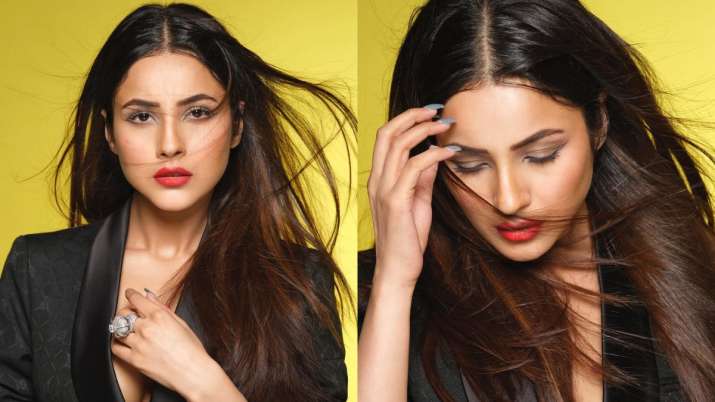 Bigg Boss 13 Shehnaaz Gill is probably one of the most popular contestants of the reality show. She has come a long way ever since her appearance on salman Khan‘s show. Be it music videos, movies or cover photoshoots– she has done it all. Just a few days back, she left her fans surprised with a BTS video from her latest photoshoot with ace photographer Dabboo Ratnani. This left everyone intrigued about her full look which has finally been shared by ‘Punjab ki Katrina Kaif.’ Yes, that’s true! Taking to her social media, Shehnaaz on Monday shared her look from the photoshoot of Dabboo Ratnani Calendar 2021 and created a buzz on the internet.

In the pictures, Sana was seen posing infront of a yellow backdrop wearing a black blazer with a deep neck. She had a bold makeup on which was completed by a red lipstick and grey nail paint. Alongside the photos, she wrote in the caption, “Love is like the wind. You can’t see it, but you can feel it.” The same set of pictures were shared by the celebrated photographer with a caption reading, “Believe In Yourself & You Will Be Unstoppable @shehnaazgill.”

Have a look at the same here:

As soon as the same was revealed, fans went gaga and made hashtags like #ShehnaazXDabbooRatnani and #ShehnaazGill one of the top trends on Twitter on Monday. While some called her ‘hot’ and ‘bomb,’ others said that they could not take their eyes off from her.  See the reactions here:

Meanwhile, have a look at some of the previous videos that were shared by the two of the,:

Not only this, but Shehnaaz went big when her photo went on the cover of the Filmfare magazine. The news was shared by BB 13 contestant herself by reposting the photos alongside caption: “You cannot scroll down social media without finding either a picture or a video of Shehnaaz Gill or someone recreating one of her famous dialogues from her reality TV show. Her fame and her rise to becoming one of the most loved celebrities on social media is commendable and she’s set the internet ablaze with her candid personality and adorable looks. Shehnaaz is everyone’s favourite girl-next-door who’s already taken the world of Punjabi cinema by a storm and is all set to achieve bigger things in the future. Here’s lauding her success as a newsmaker with our latest digital cover. @shehnaazgill #ShehnaazGill #ShehnaazGillTheNextBigThing.”

Soon after the show got over, Shehnaaz alongwith her rumoured boyfriend and the season’s winner Siddharth Shukla was seen in a couple of music videos like — Shona Shona and Bhula Denge.

Upcoming next, she has finished shooting for the Punjabi film Honsla Rakh which also has Diljit Dosanjh in it and is slated to release in theatres on Dussehra this year.

No deaths due to lack of oxygen reported by states during second Covid wave: Govt