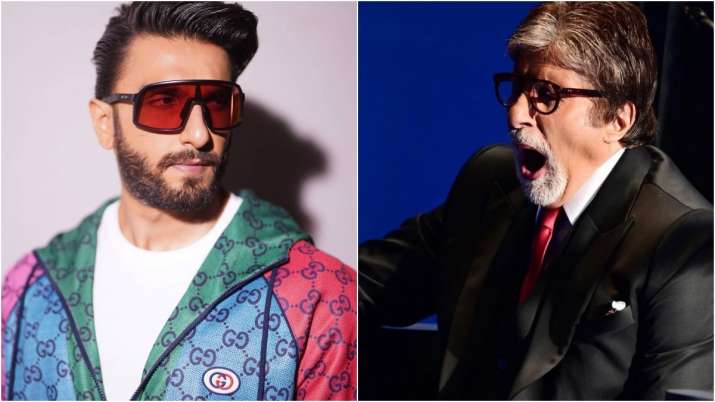 Amitabh Bachchan took to social media on Tuesday to share a photograph showing him yawning. The picture instantly prompted Ranveer Singh to post an interesting emoji in the comment section. In the photograph posted on Instagram, Big B wears a black suit and red tie, sporting what appears to be his look on the television quiz show “Kaun Banega Crorepati”.

“Happens.. when you work round the clock,” he captioned the photo. Commenting on the veteran’s photo, Ranveer commented with a goat emoji, which fans interpreted as G.O.A.T or Greatest Of All Time.

On the film front, Big B currently has “Brahmastra”, “Chehre”, “Jhund”, “MayDay”, “Goodbye” and a remake of the Hollywood film “The Intern” coming up, besides an untitled film with Prabhas and Deepika Padukone.

Ranveer too has a busy lineup to look ahead. Recently, on his birthday, the actor treated his fans with an announcement of his new project. The film has a star-studded cast compromising of Alia Bhatt, along with veterans Dharmendra, Jaya Bachchan and Shabana Azmi, besides Ranveer. The film will mark Karan Johar‘s return to director’s chair after five years.

Moreover,  the actor will be seen in movies like ’83’, ‘Sooryavanshi’, ‘Jayeshbhai Jordaar’, ‘Cirkus’, and the Hindi remake of blockbuster hit ‘Anniyan’. Also, he is all set to make his TV debut by hosting Colors’ quiz show ‘The Big Picture’.

Now, you can update your mobile number on Aadhaar card at doorstep. Details here