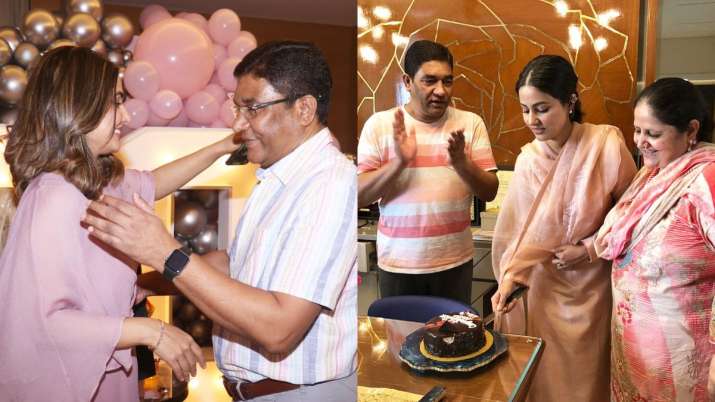 Popular actress Hina Khan on Tuesday penned an emotional note remembering her father on his third month death anniversary. The actress shared a few pictures and wrote, “Tumhaari khushi mai hi meri khushi He said, #Always  The First one to clap for me (wholeheartedly) Miss the sparkle in your eyes Dad.. Three Months Today 20th April 2021  DADDYS STRONG GURL  This is what u always called me.. Not that strong to bear your loss Dad”

The Yeh Rishta Kya Kehlata Hai actress’ father passed away due to cardiac arrest on April 20th. Hina was not in the town at the moment owing to her professional reasons. ​The actress along with Shaheer Sheikh was shooting for her music video Baarish Ban Jaan in Srinagar.

On the occasion of Father’s Day, Hina shared some unseen pictures with her father. Hina had revealed that those photos were taken seven months back, which she didn’t let him see because she wanted to post them on Father’s Day.

“We clicked these pictures 7 months back and I didn’t let u see these pictures when they were clicked coz I wanted to post them on a special day. Never did I think tht I will be posting them today. You had to see these pictures dad. Thts what we decided. Whyyyy? Miss you. Happy Fathers Day Daddy. I love you,” the post read.

On the professional front, Hina was last seen in a song titled “Baarish Ban Jaana”, in which she shared screen space with Shaheer Sheikh. Recently, Hina thanked her fans for making the song such a big hit. She dropped a video and wrote, “Fastest 1 Million+ Reels on Instagram by any Indian Song…We did it in just 2 weeks. This rainfall of your Beautiful Reels made this monsoon unforgettable for us.. Let’s make it rain even harder. Sending you all big jhappies for this feat.”