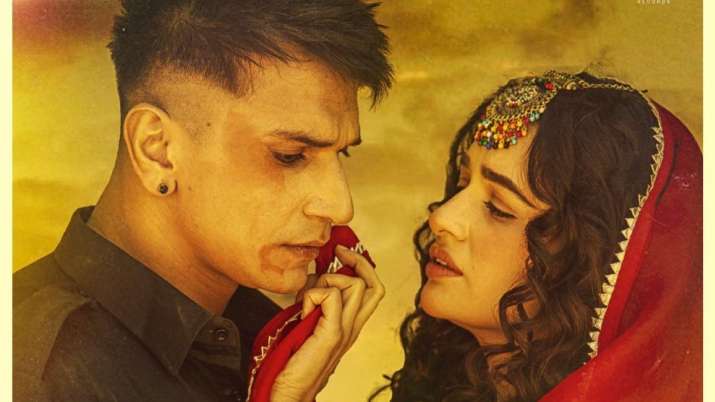 Prince Narula is knowns not just for his stints in reality TV shows but also for his personal life. He is quite active on his social media handle and keeps on sharing what’s up with his life for fans. Not just related to work but his posts also revolve around his beautiful wife and actress Yuvika Chaudhary. The two of them make an adorable couple and often make fans go gaga with their appearances in various public events as well as in songs. Yet again, the lovebirds won everyone over when they announced their new track titled ‘Pyar Hoya Ae.’  Yes, that’s true! The couple is reuniting once again on screen and has shared a glimpse of the same in the form of a teaser which was shared ahead of Eid al-Adha 2021.

Taking to Instagram, Prince shared a video clip and wrote, “Eid ke mubarak ho sab ko or eid pe release kiya teaserPyar hoya ae teaser is out plz go to my youtube channel and comments main btao ke kaisa laga.” Yuvika, on the other hand, shared the same video with just a heart as the caption.

Have a look at their posts here:

Just recently, they featured in  Asees Kaur and Inder Chahal’s Punjabi track ‘Jhuthi Soh’ which is penned by Khushi Pandher. Check their unconditional chemistry in the song here:

Meanwhile, see some loved-up posts shared by the duo on the photo-sharing application here:

Yuvika, a few weeks back, drew netizens ire for posting a video featuring Prince on YouTube where she made a casteist remark.In the video, Yuvika can be seen filming Prince as he gets a haircut. She refers to a certain community and says he looks like them.

The actress posted an apology on Instagram. “She wrote: “H’ guys I didn’t kw the meaning about that word wt I used in my las’ vlog I didn’t mean to hurt anyone and I can never do that to hurt someone I apologise to each n every one I hope you understand “ove you all.”

Prince, too, took to his Instagram stories to apologise to fans. This led to the hash‘ag ‘Arrest Yuvika Choud’ary’ trending on Twitter.

After SC rap, Kerala extends Covid-19 restrictions for a week