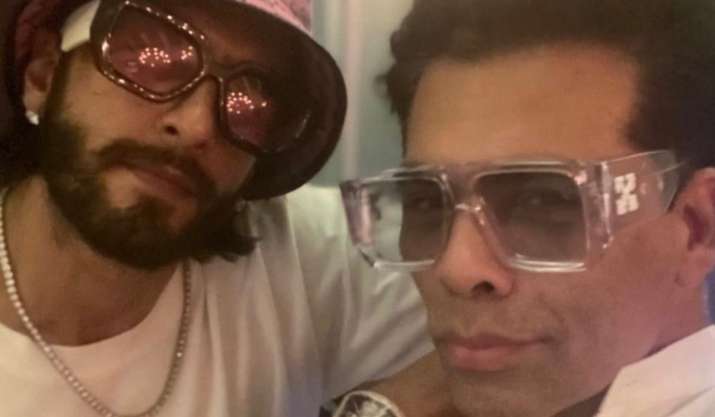 Karan Johar is all set to return to director’s chair after 5 years. He dropped a stunning picture with his ‘Rocky’ aka actor Ranveer Singh. The duo is gearing up for Karan’s next rom-com ‘Rocky Aur Rani Ki Prem Kahani’.The filmmaker announced his most exciting project on Ranveer’s birthday. The film will star Ranveer, Alia Bhatt, Dharmendra, Jaya Bachchan and Shabana Azmi in key roles. As they have already begun prep for the movie, Karan took to his Instagram Story and teased fans with a cool picture of his Rocky.  The duo is in Delhi for the recee of the film.

“Rocky uska naam!!,” KJo wrote. Both of them can be seen sporting stylish sunglasses while twinning in white. Take a look:


Two weeks back, Karan shared a teaser video for Rocky Aur Rani Ki Prem Kahani and wrote, “Thrilled to get behind the lens with my favourite people in front of it! Presenting Rocky Aur Rani Ki Prem Kahani, headlined by none other than Ranveer Singh and Alia Bhatt and written by Ishita Moitra, Shashank Khaitan & Sumit Roy. This anokhi kahani is coming to your screens in 2022! #RockyAurRaniKiPremKahani #RRKPK.”

The actors too shared the post on their verified social media accounts. Sharing the post on his birthday, Ranveer wrote, “A special announcement on my special day! Presenting – Rocky Aur Rani Ki Prem Kahani along with my dazzling supernova Alia Bhatt, directed by the genre himself, kaleidoscopic visionary Karan Johar.”