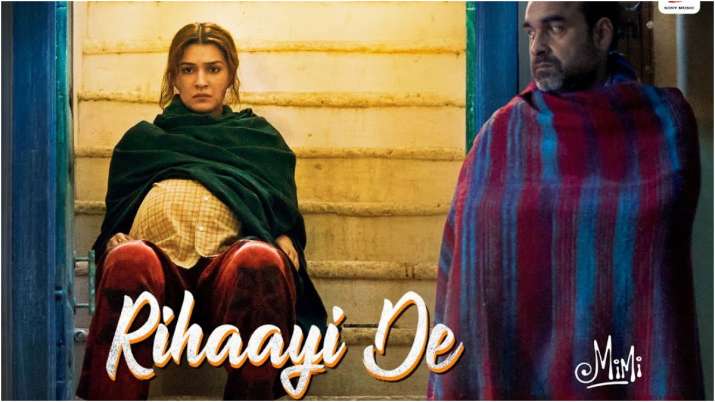 Some songs make you jump in joy, others make you rush to the dance floor, but very few melodies dive directly into the bottom of our hearts and never let go, Mimi’s next track is that kind of a tune. Laced with a moody and melancholic charm, Rihaayi De grows on you beat by beat, as A. R. Rahman’s surreal vocals glide over his captivating music.

While the film’s trailer showcased a peppy, feisty and spunky Kriti Sanon, we meet her human and vulnerable side in this track. As loved ones attempt to cheer the to-be mother, we see that something is tearing Kriti apart even though she tries to put up a brave face. Composed by A. R. Rahman and also crooned by the veteran himself, the song features touching lyrics by Amitabh Bhattacharya.

Listen to the song here:

The actress plays a young surrogate mother in the film. By the looks of it, Kriti’s character is a small town girl who’s lured to be a surrogate mother for a foreign couple. While she accepts the proposal when she’s offered a handsome sum of money, things take a turn when the couple decides they don’t want their child anymore and now Mimi is in a fix. what follows is chaos which leaves no one sheltered.

Kriti Sanon shares her glimpse from the most ‘chubbiest day of Mimi’; see pic

Laxman Utekar, who directed Kriti Sanon in the 2019 rom-com hit “Luka Chuppi”, calls the shots on “Mimi”, with the actress in the titular role. The film is a Hindi remake of the Marathi film “Mala Aai Vhhaychy”. “Mimi” also features Sai Tamhankar, Manoj Pahwa and Supriya Pathak. The film has been extensively shot in Jaipur and is slated to release on Netflix on July 30.