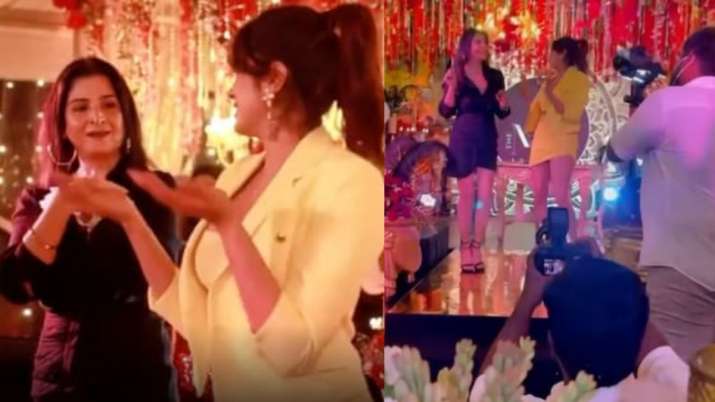 Everytime Janhvi Kapoor shakes a leg she leaves the audience mesmerised. Janhvi’s stunning dance moves on her film Roohi’s song Nadiyon Paar are still so fresh in the minds of her fans. On Wednesday, actresses’ aunt Maheep Kapoor shared a video of the duo dancing to the tunes of the track Nadiyon Paar at an event in Bangalore.

Maheep is married to Janhvi Kapoor’s uncle Sanjay Kapoor. Sharing the video, Maheep wrote: “When my niece insisted I dance with her on stage.” In another caption, Maheep hilariously added: “#ClearlyDancingNotMyForte.”

Indeed, Janhvi and Maheep’s dance performance won lot of praise. However, clearly dancing is not Maheep’s forte. Janhvi looked as fresh as daisy ia yellow skirt, top and jacket, with her hair tied in a ponytail. Maheep wore a short black dress with high heels.

For the unversed, Maheep is currently in Bangalore for some vent. She has been sharing pictures along with her friend and Sohail Khan’s wife Seema Khan. She captioned the pictures, “Bengaluru diaries.” Take a look:

Maheep and Seema were seen as the leads in Netflix’s reality show Fabulous Lives of Bollywood Wives with Neelam Kothari and Bhavana Pandey. Janhvi Kapoor also made a cameo appearance on the show.

Meanwhile, Janhvi was last seen in Hardik Mehta’s Roohi, in which she co-starred with Rajkummar Rao and Varun Sharma. Check out her dance performance to the song Nadiyon Paar in the film here:

Janhvi is gearing up for the release of her film “Dostana 2”. “Dostana 2” recently made headlines as the production banner Dharma Productions announced actor Kartik Aaryan’s exit from the film. The actress finished the shoot for her film “Good Luck Jerry” earlier this year.

Judas and the Black Messiah to Sound of Metal, 5 Oscar-nominated movies to watch on Amazon Prime Video