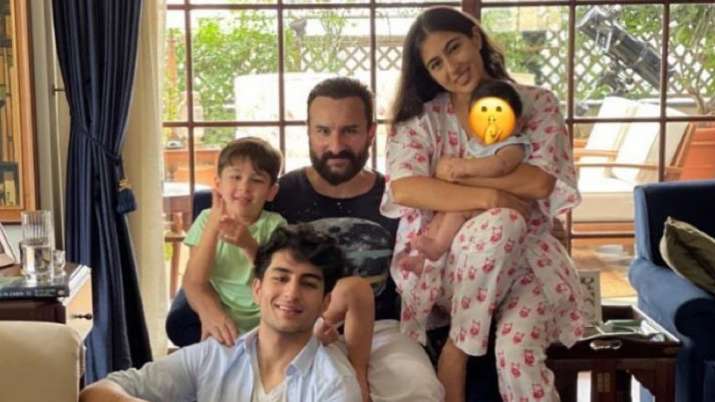 Sara Ali Khan treated her fans and followers in the most special way on the occasion of Eid. The actress shared a new picture of Kareena Kapoor and Saif Ali Khan‘s son Jeh. The picture also featured Ibrahim Ali Khan, Taimur Ali Khan and Saif Ali Khan with her. Sharing her heartfelt wishes, the actress posed with her family and wrote, “Eid Mubarak May Allah grant everyone peace, prosperity and positivity Inshallah hoping for better times for us all.”

In the picture, Sara can be seen holding Jeh in her arms while Taimur Ali Khan sat on Saif’s lap. Ibrahim Ali Khan took a seat on the floor. Sara hid Jeh’s face with an emoji.

Soon after Sara’s post fans bombarded the comments section with their good wishes and urging the Khan’s to reveal the face of Jeh. One of the users wrote, “Aww the best photo.” “I can’t express how happy I am I just dm u 15 mins back asking for a photo”, said the other. Fashion designer Manish Malhotra also dropped heart emojis in the comments.

Last year, speaking about names for their second baby, Kareena had told Neha Dhupia on What Women Want, “After the whole controversy of Taimur, both Saif and me have not even thought about it. We’re like going to leave it last minute and then spring a surprise.”

For the unversed, Saif and Kareena announced the pregnancy in August last year, welcomed their baby boy on February 21. Kareena, 40 and Saif, 50, are also parents to son Taimur, who was born on December 20, 2016. The toddler has been an Internet sensation ever since his birth and is followed by the paparazzi round-the-clock.