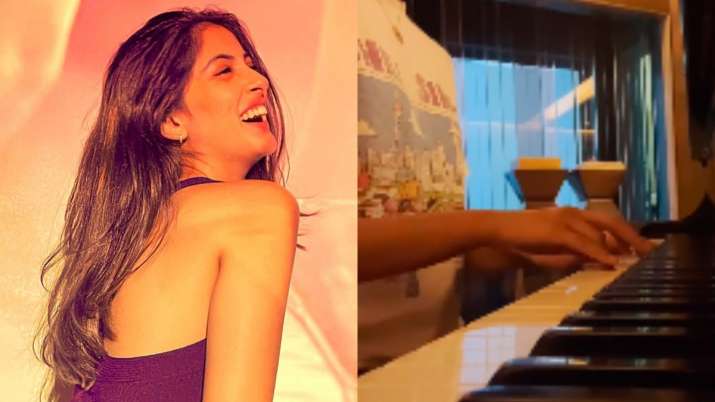 Amitabh Bachchan‘s granddaughter Navya Naveli Nanda is one of the most talented star kids. On Wednesday, Navya shared a video of herself playing the piano and creating magic with keys. Navya chose to play a tune by Italian pianist Ludovico Einaudi: “Ludovico after a long time,” she captioned the two-minute long video.

Soon after her post, she was showered with lots of love praises by her followers and well-wishers. Navya Naveli Nanda’s aunt Naina Bachchan, wrote: “Playing so well, Nav.” Navya responded to the comment and wrote: “Love you!”

For the unversed, Naina Bachchan is the cousin of Shweta and Abhishek Bachchan. She is the daughter of Amitabh Bachchan’s brother Ajitabh.

This is not the first time Navya shared a glimpse of her piano sessions.

Earlier she had impressed the Internet with yet another video from her piano session. As usual, the post was bombarded with comments and heart emojis. Her friend Suhana Khan, couldn’t stop cheering for her. She played the television series’ Downton Abbey theme song. Navya shared the video with the caption, “10 points for guessing the song…”

The starkid has no plans of joining Bollywood as an actress. Her mother Shweta Bachchan had revealed in an interaction that Navya doesn’t want to be an actress and likes to stay away from showbiz.

After her graduation last year, Navya started her own business. She launched a platform for women, Aara Health, to discuss about all their health issues. She started the new venture with three more ladies named Ahilya Mehta, Mallika Sahney and Pragya Saboo. About the initiative, one of the posts read, “We are young and independent women who have come together to solve a common problem that has not been given the attention it deserves. Our different backgrounds and experiences have inspired us to help empower other women!⁣”