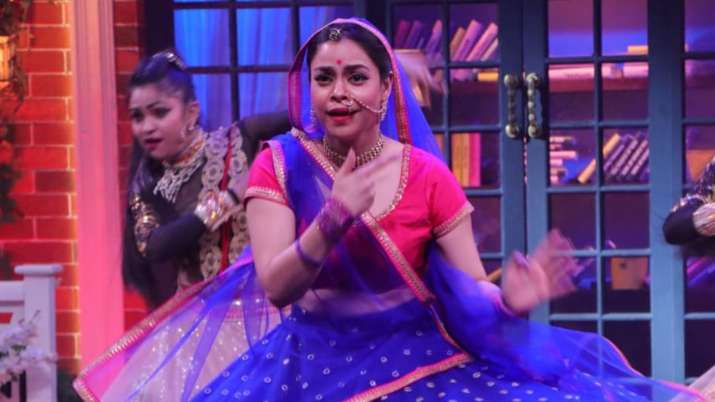 Actress Sumona Chakravarti’s absence from the latest teasers of The Kapil Sharma Show have sparked speculation of her possible exit. The show is all set to return with his new season of the popular comedy chat show. The show went off air earlier this year when Kapil decided to take a break for his wife Ginni Chatrath, their daughter Anayra and their newborn son Trishaan. The upcoming season of the show will feature Kapil’s old friends and famous comedians Sudesh Leheri, Krushna Abhishek, Kiku Sharda, Bharti Singh and Chandan Prabhakar.

However, Sumona Chakravarti who portrays the role of Kapil’s wife Bhuri or his love interest in the show was missing from the pictures. Amid this, Sumona took to her social media handle and shared a cryptic message that hinted she might not be a part of the comedy show anymore. She dropped a post about how to ‘horrible feeling and moving on’ from a situation. Although, neither Sumona nor the makers of the comedy show have officially announced or commented on her absence from promos.

Sumona shared a quote from Charlotte Freeman’s book, Everything You’ll Ever Need and it read, “You will never know if something is meant for you if you don’t give it a proper chance. Whether it’s a relationship, a new job, a new city, or a new experience, throw yourself into it completely and don’t hold back. If it doesn’t work out then it probably wasn’t meant for you and you’ll walk away without regret, knowing that you put your whole heart into it.”

“That’s all you can ever do. It’s a horrible feeling leaving a situation knowing that you should have and could have done more. So find the courage to take that chance, find the inspiration to make your next move, and once you do, pour your heart into it and don’t look back,” the post read.

Not just this, Sumona’s absence from the video shared by Archana Puran Singh also left netizens thinking that she is not part of the new season of The Kapil Sharma Show. However, there’s no confirmation from Sumona’s side. In between all the certainty, there are reports that the makers and actress are currently in talks.