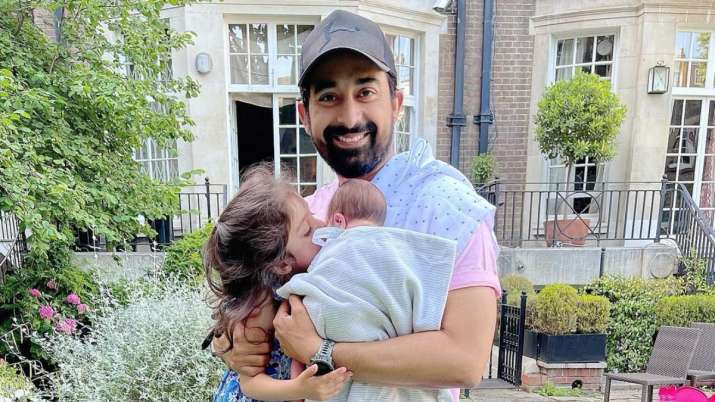 Splitsvilla X3 host Rannvijay Singha and his wife Prianka were blessed with a baby boy on July 12. The couple is already parents to a 4-year-old daughter named Kainaat.  On Thursday, both Rannvijay Singha and his wife took to social media to introduce their second born, a baby boy to the world. Interestingly, they also announced the name of the little one. The couple has named their son Jahaanvir Singh Singha.

Prianka took to Instagram and shared a picture of Rannvijay, their daughter Kainaat and their newborn son. She captioned the picture, “My World, My Universe, & My Life. Welcome to the family Jahaanvir Singh Singha #kainaat #jahaan Satnam Waheguru.”

Rannvijay too took to Instagram and shared the news with his fans and followers.

However, the parents haven’t revealed the face of the little one. Earlier, Rannviujay had penned a heartfelt note addressing to all the mothers in the world. He thanked them for being magical beings. Sharing a picture with his wife right before delivery, Rannvijay wrote, “This is for @priankasingha and all the mothers in the world. What you guys do and go through without anyone even noticing is unbelievable.”

“Thankyou for being magical beings, the biggest thing is that you guys don’t even make a big hoopla about it .. but it’s pure magic and it’s divine. Thank you mothers and thank you Prianka,” Rannvijay added. He dropped a picture with his wife Prianka Singha from the hospital before she gave birth to their second child.

Earlier this year in March, the couple announced their second pregnancy. Sharing a photo with his wife and daughter, Rannvijay wrote on Instagram, “Missing the three of you so much… #satnamwaheguru. @priankasingha @singhakainaat.” The picture showed Rann and his daughter Kainaat having their hands resting on Prianka’s baby bump as they all pose for a picture.

The couple who has been married for six years already.Rannvijay and Prianka met through common friends and fell in love. They got married in Kenya in 2014 in a small wedding ceremony. The actor had his wedding filmed and shared on YouTube. The duo welcomed their first child– their daughter Kainaat in January 2017.