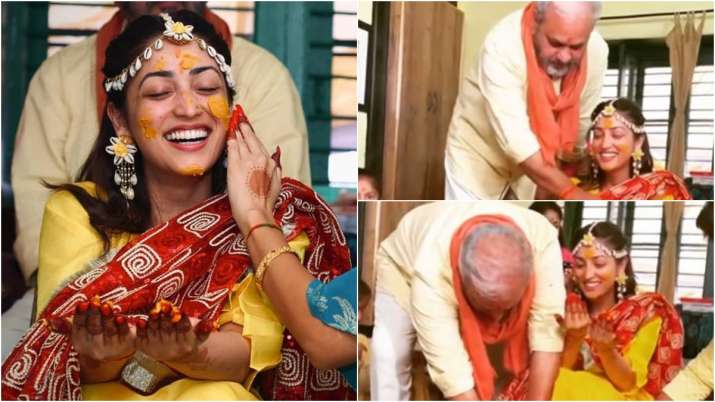 Actress Yami Gautam’s low key wedding to filmmaker Aditya Dhar surprised many. While many couldn’t get over the simplicity of the wedding, others lauded the couple for following the traditional wedding rituals with ease. On Thursday, the actress gave her fans yet another glimpse of her close-knit wedding. She posted a video from her Haldi ceremony, where her father is seen performing a ritual.

In the video, the actress is all smiles seeing her father participating in the wedding nuptials. Along with the video, she wished her father on his birthday writing, ” It took a wedding to have finally so many moments captured with my camera-shy father. Happy birthday to my amazing paa. And your non-stop commentary is more prominent than all of us present together in the frame, eh @s_u_r_i_l_i_e.”

Meanwhile, the Bollywood actress recently celebrated a month of her wedding with filmmaker Aditya Dhar. Yami tied the knot with her “Uri: The Surgical Strike” helmer in June. The wedding was an intimate affair with only relatives and close friends of the couple in attendance.

Celebrating the completion of one month of her wedding, Yami shared a photo from the ceremony on Instagram. In the photo, the bride and groom can be seen holding a piece of red cloth together. “To a month filled with love and gratitude. @adityadharfilms,” she captioned the post.

The actress will next be seen in the horror-comedy film “Bhoot Police”. The Pavan Kirpalani directorial also features Saif Ali Khan, Jacqueline Fernandez and Arjun Kapoor.

Apart from this, Yami will be seen alongside Abhishek Bachchan and Nimrat Kaur in the forthcoming film “Dasvi”.