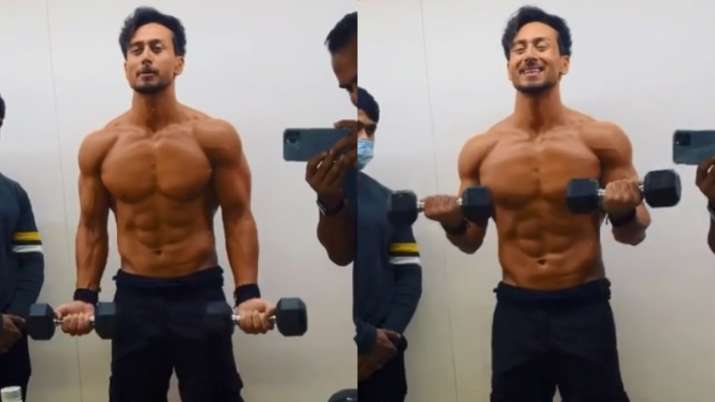 Bollywood’s heartthrob, Tiger Shroff always leaves everyone’s hearts racing with his chiseled looks. Tiger often shares insigts from his daily life on social media. From energetic dance videos to rigorous workout sessions actor’s Instagram feed is a delight to watch. On Thursday, the actor treated his fans and followers with a video of himself lifting weights, soaring the temperature high. The video was a hint that Tiger is preparing for his upcoming film Heropanti 2. Sharing the video Toger wrote, “Getting action ready after a while…#heropanti2 @rajendradhole”

Talking about his film Heropanti, the actor has already completed first schedule of shooting for the sequel of his 2014 debut movie Heropanti. The film is currently slated to release on December 3 this year. Directed by Ahmed Khan, the film is one of the most awaited films of the year.

Tiger Shroff had started shooting for Heropanti 2 on April 3 in Mumbai. Apart from Tiger, the sequel will also star Tara Sutaria in the lead role. The first look poster of ‘Heropanti 2’ was unveiled in February 2020. Happy to reunite with her favourites, Tara had announced her coming on board by extending thanks to producer Sajid Nadiadwala for believing in her.

Reportedly, Tiger Shroff, Tara Sutaria and Nawazuddin Siddiqui will head to Russia in July to shoot next schedule of the film. Heropanti 2’s music will be composed by A R Rahman, with the lyrics being penned by Mehboob.

Tiger stepped into films with the 2014 release “Heropanti”. His notable films include the “Baaghi”, “Student Of The Year 2” and “War”.