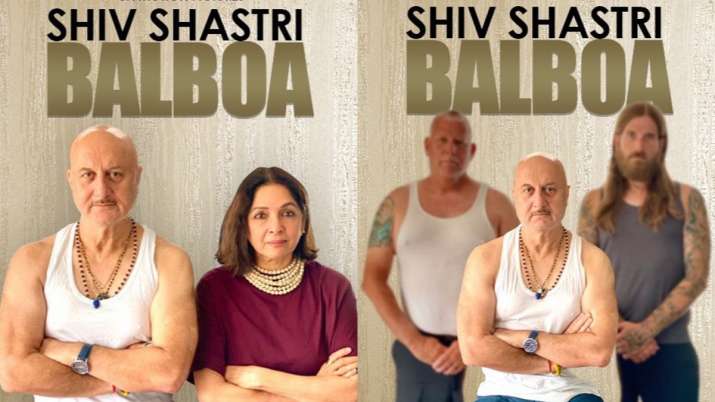 Actors Anupam Kher and Neena Gupta took to social media on Thursday to share the first look of their new film “Shiv Shastri Balboa”, directed by Ajayan Venugopalan. “Presenting the first look of my new film#ShivShastriBalboa. A fascinating tale of survival of an Indian in a small town in America!! Delighted to be working with the gorgeous and [email protected]_gupta and a very interesting and talented international cast and crew!! More details and surprises to follow!,” wrote Anupam Kher on his Instagram page, mentioning in the hashtag that this is his 519th film.

Neena Gupta also posted on her Instagram account: “Very excited to be working with @anupampkher after so many years, on our new film#ShivShastriBalboa #RockyBalboa #519thFilm#AnIndianInAmerica #Humour#Drama #family.”

Neena Gupta and Anupam Kher will be back on the screen after many years.

In the first look Anupam Kher is seen dressed in a white ganji and blue jeans and some beaded neck pieces whereas Neena Gupta is dressed in a maroon dress with pearl necklaces.

On Saturday, Anupam took to social media to announce his 519th film. The actor announced the film while flying above the Atlantic Ocean. In his post he also thanked the film fraternity for being kind to him. Although he did not share the film’s name or information about the cast and crew, Kher had promised that he would divulge details soon.

“Delighted to announce my 519th film while flying above the #AtlantcOcean at 36000 feet. God has been kind to me. It is so humbling to be able to reach this possibility. Of course, it is my hard work but it is also the blessings of millions of people, my fans, my followers on SM, my friends, my family, my elders,” Kher shared in an Instagram post.

“Also thanks to #IndianFilmIndustry and the film makers around the world for being so kind and generous to me. I feel special. But if my father was around he would have said, allah meherban toh gadhera pahalwan. will give you the details soon!!” he added.

Anupam Kher was last seen in 2019 in the film “The Accidental Prime Minister”. Meanwhile, Neena Gupta’s last film was “Sardar ka Grandson”. Her upcoming films are “83”, “Dial 100”, “Gwalior”, and “Goodbye”.