The crime branch of Mumbai Police also conducted a search of the house and seized a laptop, the official added. As Shetty was a director of Viaan Industries, Kundra’s firm, the police decided to question her. She had later resigned from the post. 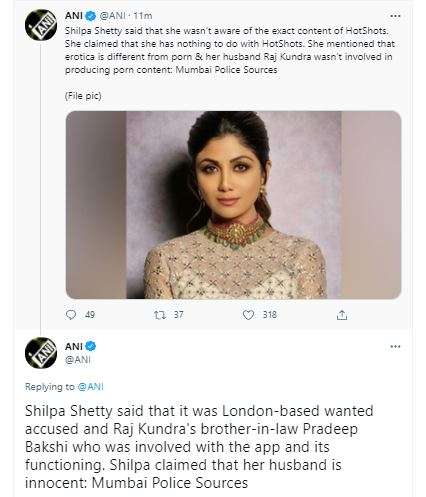 Earlier on Friday, a court extended Kundra’s police custody till July 27. He was arrested in the case on July 19 by the city police’s crime branch after being booked under relevant sections of the Indian Penal Code and the Information Technology Act. He was produced before the magistrate court at the end of his earlier remand on Friday. Police sought extension of his custody to probe the matter further.

The police had earlier told the court that the 45-year-old businessman was gaining financially from the illegal activity of making and selling pornographic material.

Kundra, meawhile, has moved the Bombay High Court challenging the police remand and the cases against him. “Without following the due process of law under the provisions of Section 41A of the Code of Criminal Procedure, 1973, as mandated by the Supreme Court from time to time, police arrested Kundra by calling him under the grab of recording a statement,” the businessman’s plea states.