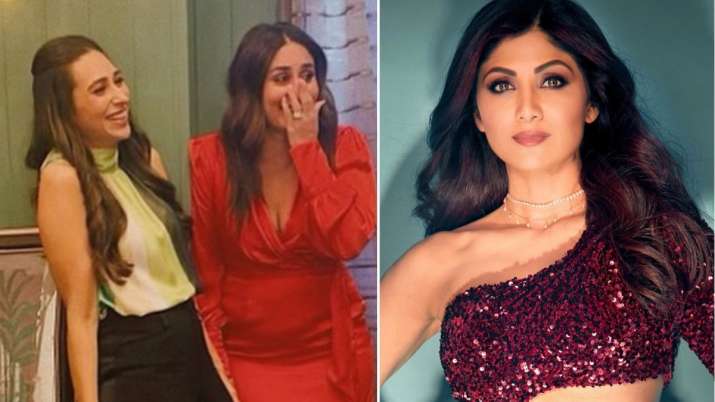 This weekend Super Dancer – Chapter 4 will celebrate actress Karisma Kapoor and her body of work in a ‘Karisma Kapoor Special Episode’. All the contestants will be seen performing on Karisma’s chartbusters and paying a befitting tribute to the actress. She will also be filling in for actress Shilpa Shetty who is seen as a regular judge on the dance reality show will be skipping the episode this weekend.

Contestant Pari and super guru Pankaj performed on one of Karisma’s favourite most songs – Aaye Ho Meri Zindagi Mein Tum Bahar Ban Ke and projected a beautiful bond between a grand-daughter and a grand-father through their dance. An elated Karisma stated that she was reminded of her own bond with her grandfather and she remembered him through this act.

Pari who is known to be a walking-talking questionnaire had a volley of questions prepared for Karisma who obliged her with ready answers! When Pari asked her- who was naughtier amongst her and Kareena Kapoor Khan, Karisma replied, “Main bohot bholi thi… wo (Kareena) bohot natkhat.”

She further went on to add, “Since childhood, Kareena was a very inquisitive child. Usko knowledge ka bohot shauq tha. She would always keep gauging everything in life, to gain knowledge… since a young age.”

When asked if Karisma liked studying, she responded by saying that she was more inclined towards extra-curricular activities. “Mujhe actually school main na, dance, debating, competitions… in sab cheezon main bohot shauq tha. I was very sporty and artistic. But we all have to study, right? Education sab se important hai. But you should also pursue your hobbies. I think that’s what I did.”

When prodded further by Geeta if she ever bunked school, Karisma said, “I was too goody-goody (at that age). I was too sincere at school. I used to regularly attend school and properly do my homework.” She also mentioned that her sister Kareena was a very good student. Very good at studies and artistically inclined as well.

Impressed by Pari’s curiosity about Kareena, Karisma made Pari’s dream come true when she called up her sister Kareena from the set. The five-year-old was on cloud nine, when Kareena stated that she is a huge fan of Pari and her dancing. Said Kareena Kapoor “Main aapki fan hun, kyunki maine aapka dance dekha hai… and kya dance karti hain aap! I wish I was there so that I could have seen your dance live. Actually I am a fan of Super Dancer because itne saare talented contestants hai. But Pari, you have won my heart. I want to say that Taimur also loves Super Dancer and wo bhi aap sabhi ka fan hai! We both enjoy the show together.”

Tune in to Super Dancer – Chapter 4, this weekend to watch the Karisma Kapoor Special Episode at 8:00pm only on Sony Entertainment Television

PM Modi spoke to Mirabai Chanu and congratulated her