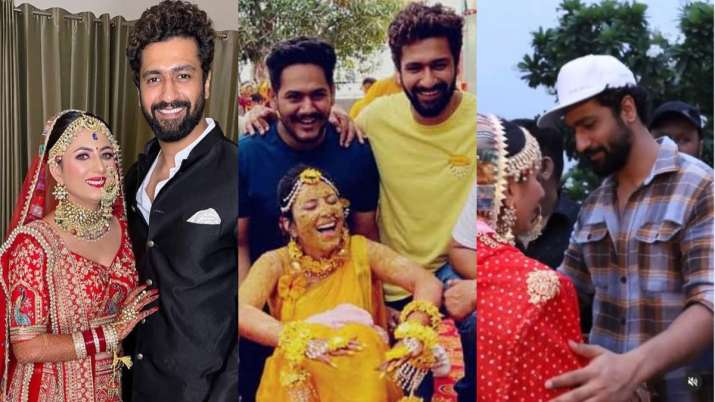 Pictures and videos of Vicky Kaushal from his cousin’s wedding have surfaced on social media. Dressed in a black suit, the actor looks handsome as he completed his duties as the brother of the bride. From attending pre-wedding festivities including the Haldi ceremony to joining his cousins to shoulder the ‘doli’, to bidding an emotional goodbye to his sister during the ‘vidaai’ ceremony, the actor completed all the rituals with much grace and style.

These pictures and videos are shared by the actor’s cousin, Dr Upasana Vohra on her Instagram account. Take a look:

Earlier this month, Vicky had treated his fans with a picture featuring his toddler niece and revealed how much effort it took to befriend her. Hinting at the family gathering, the actor posted the picture on Instagram, where he is seen holding the kid and kissing her hand. He is wearing a chequered shirt and sporting a rugged look.

“Took a lot of ghumi-ghumi and joker-ing around for this Tayaji to befriend his little Bhatiji . #joy,” he wrote as caption.