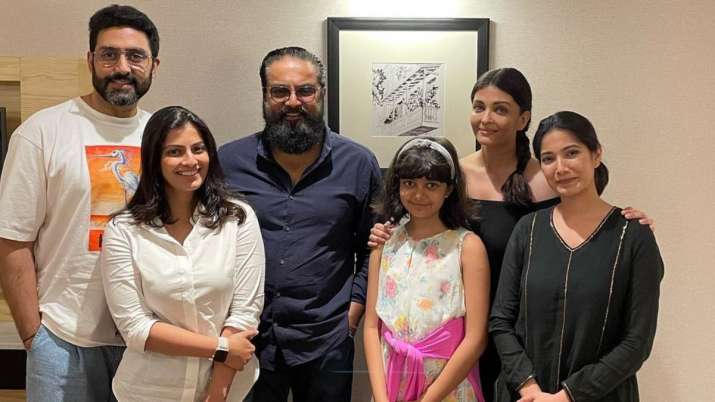 Bollywood power couple Aishwarya Rai and Abhishek Bachchan‘s daughter Aaradhya Bachchan is one of the most loved star kids. Ever since she was born, she has been receiving a lot of media attention. Recently, a few pictures of Aaradhya surfaced on the internet where she is seen striking a pose along with her parents.

The pictures are from the time when Bachchan’s met Tamil actor Sarath Kumar and his family. Both the families met in Puducherry, in Tamil Nadu. For the unversed, Sarath and Aishwarya are currently working together on Mani Ratnam’s upcoming film Ponniyin Selvan.

Sharing the pictures, Varalaxmi wrote, “Met 3 of the warmest and most humble people last night.. none other than the gorgeous @aishwaryaraibachchan_arb the handsome hunk @bachchan and their sweetest daughter #aaradhyabachchan Despite the families and lineage that they hail from, their humility and warmth was so amazing, I was just overwhelmed with their love.!!! It was so sweet of you to meet us and spend time with us.. may god shower all his blessings on your family.!!! Thank you daddy for making this happen @r_sarath_kumar I think @poojasarathkumar is still recovering from the shock.!!! Hahah #fangirl.”

The post was bombarded with comments from the netizens as they could not stop gushing over the pictures. The fans especially noticed that Aaradhya has grown so tall. One of the users wrote, “OMGGGG! Aaradhya looks so tall. My baby has grown up so fast.” Another said, “She will be as tall as her dad in next few years.” “Wow… So happy to see them together and look at Aaradhya’s height,” commented other one.

Aaradhya, who will turn 10 later this year, looked a few inches shorter than Aishwarya in the pictures.

Aishwarya and Sarath had recently shared the poster of their upcoming movie Ponniyin Selvan. The film is based on writer Kalki Krishnamurthy’s book by the same name. Reportedly, the shoot resumed earlier this week and the team is filming in Puducherry.