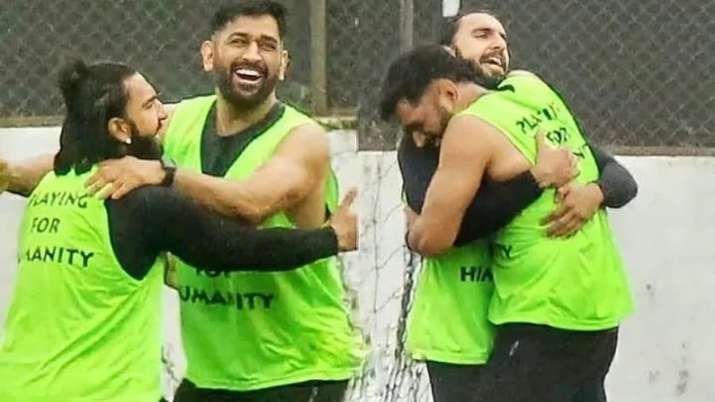 Bollywood actor Ranveer Singh and former Indian cricket team captain MS Dhoni were spotted playing football at a stadium in Mumbai. Along with Dino Morea and Saif Ali Khan‘s son Ibrahim Ali Khan, Ranveer and Dhoni were a part of the All Stars Football Club, which holds matches to collect income for charity while promoting the game of football in India. The duo is seen sharing a hug during a friendly football match. Ranveer and the cricketer were playing for the same team while Ibrahim wore a jersey of the opponent team.

On Sunday, Ranveer was snapped hugging Dhoni after the match. In the picture, they are seen wearing neon green jerseys, along with the rest of the team members. The actor can be spotted a ponytail for the match. Paparazzi accounts on Instagram have shared pictures from the venue.

Last year, Dhoni announced his retirement from international cricket.  On the same, Ranveer took to his Instagram handle to share a note which read, “This little gem of a photo is one of my prized possessions. It was taken around the year 2007/08 at ND Studio in Karjat. I was about 22 years old, working as an assistant director. I took up this particular job only because the ad film featured the one & only MS Dhoni.”

On the professional front, Ranveer has a busy lineup to look ahead. Recently, on his birthday, the actor treated his fans with an announcement of his new project. The film has a star-studded cast compromising of Alia Bhatt, along with veterans Dharmendra, Jaya Bachchan and Shabana Azmi, besides Ranveer. The film will mark Karan Johar‘s return to director’s chair after five years.

Apart from this, the actor will be seen in movies like ’83’, ‘Sooryavanshi’, ‘Jayeshbhai Jordaar’, ‘Cirkus’, and the Hindi remake of blockbuster hit ‘Anniyan’. Also, he is all set to make his TV debut by hosting Colors’ quiz show ‘The Big Picture’.