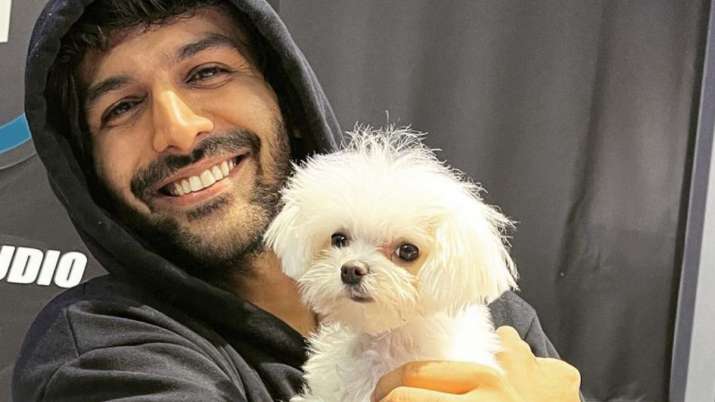 Bollywood actor Kartik Aaryan’s furry friend is the cutest thing on the internet today. The actor treated his fans on social media with a photo of himself with pawdorable buddy. Kartik wants someone to launch his little pup. On Monday the actor dropped three photos of himself with a cute friend. Sharing them, he wrote, “Ise koi launch karo (Please someone launch him),” followed by a heart emoji. Dressed in a black hoodie, Kartik is seen striking a sweet pose with his ball of fur.

Check out the photo here:

On the professional front, the Bollywood actor is all set to headline RSVP and Baweja Studios’ ‘Captain India’. Directed by filmmaker Hansal Mehta, Captain India is inspired by one of India’s successful rescue missions from a war-torn country. The film is produced by Ronnie Screwvala and Harman Baweja in which Kartik will play a pilot who spearheaded the operation and displayed exemplary bravery and courage in the process.

Kartik said: “‘Captain India’ is inspiring and thrilling in equal measure and it gives me great pride and honour to be a part of such a historic chapter of our country.”

“I have immense respect for Hansal sir’s body of work and this was the perfect opportunity to collaborate with him,” Kartik said about the filmmaker who’s lknown for projects like Aligarh, Shahid and the recently released Scam 1992: The Harshad Mehta Story.

Mehta said the film will revisit a moment where a man goes beyond his own pain.

Apart from this, Kartik will next be seen in Bhool Bhulaiyaa 2 which also features Kiara Advani, Tabu and Rajpal Yadav in lead roles. The actor also has Sajid Nadiadwala’s yet-untitled love story and Dhamaka in the pipeline.