Govinda, Nora Fatehi are here to take away your Monday blues as they dance on Zaalima Coca Cola; watch 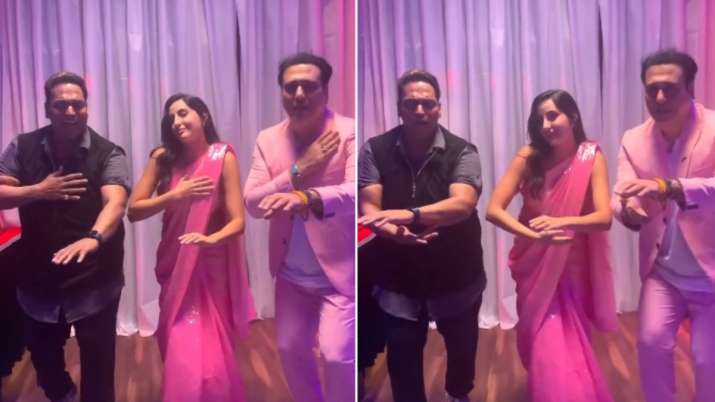 Nora Fatehi treated her fans and followers with an interesting dance video on Monday. And this time it was not just her in grooving but the “legends themselves”, choreographer Ganesh Acharya and actor Govinda. Nora took to Instagram and dropped the video announcing an interesting challenge known as the “hook step challenge” ahead of the release of the song Zaalima Coca Cola from her upcoming film Bhuj: The Pride Of India.

In the video Nora, Ganesh Acharya and Govinda can be seen dancing to the tunes of Zaalima Coca Cola. She indeed looked breathtakingly beautiful in a pink shimmery saree.

Nora is an amazing dancer and she often treats her fans with her dancing videos. Check out here:

Meanwhile, Nora will portray the role of Heena Rehman in the Abhishek Dudhaiya directorial venture, Bhuj: The Pride Of India. Besides Nora Fatehi, the movie also stars Ajay Devgn and Sonakshi Sinha. It is scheduled to release on Disney + Hotstar on August 11.

Introducing her character to fans with a teaser, Ajay Devgn wrote, “Fierce & Bold She will cross any limit to protect her country Presenting @norafatehi as Heena Rehman! #BhujThePrideOfIndia releasing on 13th August only on @disneyplushotstarvip (sic).”

Also read: Nora Fatehi dances her heart out to the beats of Drake’s ‘One Dance’ | WATCH

Apart from  Bhuj: The Pride Of India, she will also be seen in Satyameva Jayate 2.