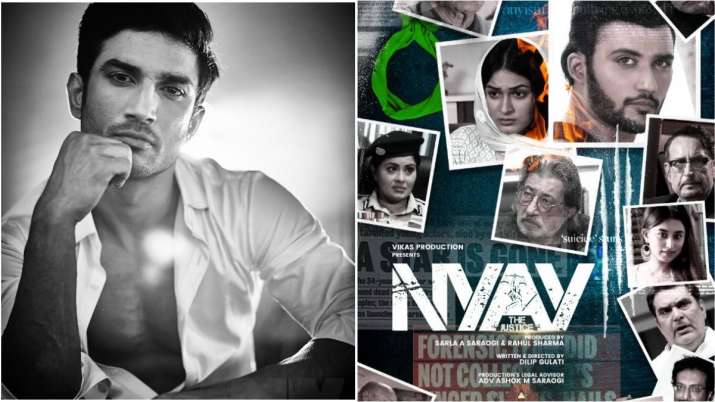 The Delhi High Court Monday granted liberty to father of Sushant Singh Rajput to approach the single judge with his grievances surrounding the release of a film purportedly based on the late Bollywood actor’s life. A bench of Justices Rajiv Shakdher and Tawant Singh said the parties were “free to advance their stand” before the single judge in view of the fact that the film — ‘Nyay: The Justice’ –now stood released on a digital platform. The division bench was hearing the appeal filed by Rajput’s father Krishna Kishore Singh against the single-judge order refusing to stay the release of the film.

“Contentions of the appellant (Krishna Kishore Singh) will be examined in the background of the film that is available on Lapalap Original website”, the division bench said while disposing of the appeal.

It clarified that in case the makers of the film were going to bring any changes to it, information would be given to Singh who would be at liberty to approach the single judge if so advised.

Senior Advocate Vikas Singh, appearing for the late actor’s father, argued that the makers had committed fraud and perjury as they made a “completely false statement on oath” pertaining to the release of the film on June 11.

The senior advocate said that the video uploaded on the digital platform had 72-minute content missing from it and was merely “an assortment of shooting” which could not be called as releasing the film.

The bench said Singh would be at liberty to filed review of the single-judge order on these grounds if he comes to the view that there was a fraud.

Senior Advocate Chander Lall, appearing for the filmmaker, responded that the actor’s father could not act as a judge of the quality of the film. “Who is he (Krishna Kishore Singh) to dictate what should be the quality of the film? Good or bad, it is there.”, Lall argued as he claimed that over three lakh people had already seen the film online and blank intervals were provided to accommodate any advertisement.

Last month, a vacation bench of the high court had issued notice in Rajput’s father’s appeal against single judge order refusing to stay the release of several movies, including ”Nyay: The Justice”.

An application was also filed by him, claiming that the release of the film on the digital platform was “nothing but a sham” as it was “incomplete, completely smudged, blur and hazy throughout”.

The high court had, however, refused to pass any interim order to restrain further publication of the film.

The single judge had earlier said it found merit in the submissions of producers and directors that if information of events which have occurred is already in the public domain, one cannot plead any violation of right to privacy on a movie inspired from such events.

Some of the upcoming or proposed movie projects based on his son”s life are — ”Nyay: The Justice”, ”Suicide or Murder: A star was lost”, ”Shashank” and an unnamed crowd-funded film.

The high court had directed the filmmakers to render complete accounts of the revenue earned from the films, if any case of damages is made out in future and listed the suit for completion of pleading before the joint registrar.

The suit claimed that in case a “movie, web-series, book or any other content of similar nature is allowed to be published or broadcasted, it would affect the right of the victim and deceased for a free and fair trial as it may cause prejudice to them”.