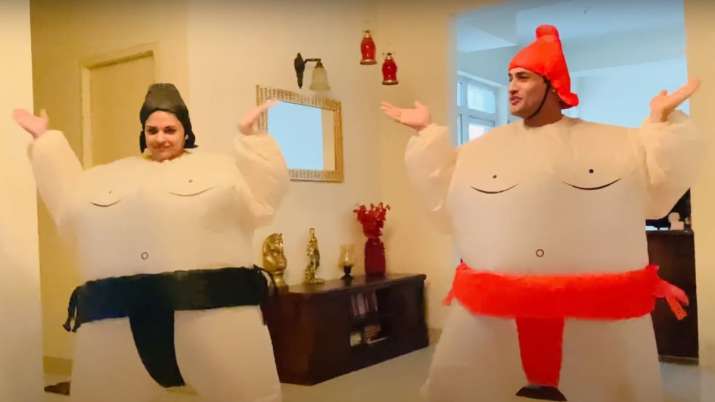 Bigg Boss 13 finalist Asim Riaz and Punjabi singer-actor Himanshi Khurana are one of the most loved couples of tinsel town. On Monday, Asim treated his fans and followers with one of the most adorable videos of himself and his girlfriend Himanshi performing on his latest single “Sky High.” In the video, the couple looked as cute as a button wearing inflatable sumo wrestler costumes.

Earlier, Himanshi Khurana had given a glimpse of the video on Sunday. She shared an Instagram reel with a caption that read, “What people think I do …….. what I’m actually doing.”

Asim Riaz’s song “Sky High” was released on July 13. The song also featured Himanshi and his brother Umar Riaz. The song is penned down and sung by Asim.

The actor-singer recently revealed that he is working on two more songs with Himanshi Khurana.

Meanwhile, Asim Riaz dropped his debut track as a rapper on the occasion of Eid earlier this year. Titled “Back to start”, Asim has written his debut song besides singing it.

Asim garnered the spotlight during his stint on season 13 of the show, which aired in 2019, where he met his lady love Himanshi Khurana. He says the controversial reality show has been a game-changer in his life.

Since then, he has featured in several music videos including “Kalle sohna nai” and his maiden rap album “Back to start”, and is now geared up for his next track “Sky high”, which also features his Himanshi.

Asked if he considers “Bigg Boss 13” the gamechanger in his life, Asim told IANS: “100 percent, Bigg Boss was life-changing for me. I am thankful for getting this opportunity and believing in me.”

He said he would never forget the show and thanks all his fans for keeping faith in him. “Thank you so much in believing in me and I hope main usme khara utra (I hope I have proved myself),” he summed up.

JEE Advanced 2021 to be held on October 3, says Dharmendra Pradhan