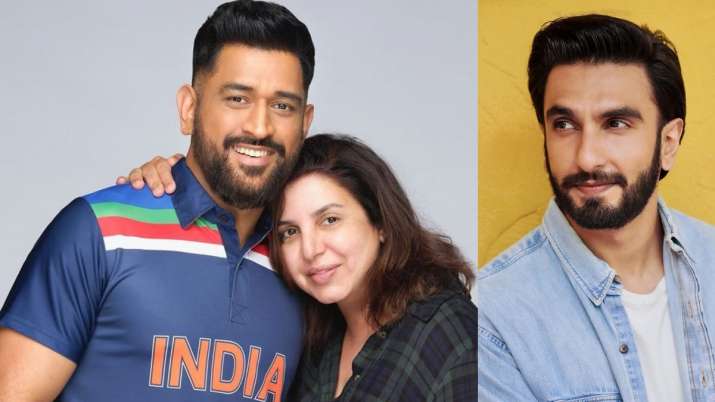 Filmmaker Farah Khan shot an advertisement with cricket legend MS Dhoni and she is a ‘fan’ now. Taking to her Instagram, the director dropped a picture of herself with the former Indian cricket captian. The picture has been clicked by celebrity photographer Dabboo Ratnani. Sharing the picture, Farah Khan wrote “Directed MS Dhoni for an ad today. What an amazing guy.. so punctual, so down to earth, took pics with everyone frm clients to spotboys with a smile..im a fan now.”

Farah Khan’s post received scores of comments from the fans of MS Dhoni. And actor Ranveer Singh is a huge fan of the cricketer. His fan boy spirit made him drop a comment on Farah’s photo. “He is the best,” the actor wrote along with several heart-eyed emojis.

Ranveer and MS Dhoni were on Sunday spotted playing football at a stadium in Mumbai. Along with Dino Morea and Saif Ali Khan‘s son Ibrahim Ali Khan, Ranveer and Dhoni were a part of the All Stars Football Club, which holds matches to collect income for charity while promoting the game of football in India. The duo was seen sharing a hug during a friendly football match. Ranveer and the cricketer were playing for the same team while Ibrahim wore a jersey of the opponent team.

The Gully Boy actor was snapped hugging Dhoni after the match.

On the professional front, Ranveer has a busy lineup to look ahead. Recently, on his birthday, the actor treated his fans with an announcement of his new project. The film has a star-studded cast compromising of Alia Bhatt, along with veterans Dharmendra, Jaya Bachchan and Shabana Azmi, besides Ranveer. The film will mark Karan Johar‘s return to director’s chair after five years.

Apart from this, the actor will be seen in movies like ’83’, ‘Sooryavanshi’, ‘Jayeshbhai Jordaar’, ‘Cirkus’, and the Hindi remake of blockbuster hit ‘Anniyan’. Also, he is all set to make his TV debut by hosting Colors’ quiz show ‘The Big Picture’.

Also Read: Kriti Kharbanda on marriage with Pulkit Samrat: ‘I choose to answer this question only to my parents’