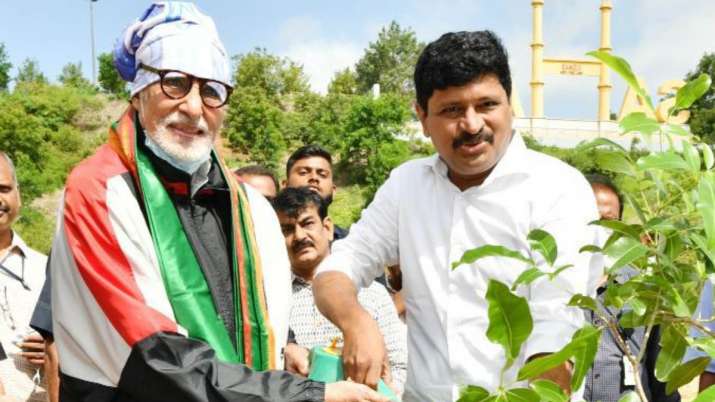 Megastar Amitabh Bachchan on Tuesday took part in Green India Challenge by planting saplings at Ramoji Film City, Hyderabad. The actor lauded the efforts of Green India Challenge and its founder and Rajya Sabha MP Joginipally Santosh Kumar in expanding the green cover across Telangana and the country. Big B enquired about what inspired Santosh Kumar to take up this initiative, how plants are cared for, tended even after years of plantation and expressed his happiness at the results.

He said he was surprised to know that GIC planted three crore saplings recently on the occasion of the birthday of Telangana’s minister for municipal administration and urban development K. T. Rama Rao. “It was certainly a mammoth task, and I am in awe of their dedication and commitment towards the environment,” he said.

The Superstar also congratulated GIC for entering into Guinness Book of World Records with a massive plantation of 2 crore seed balls within an hour. “I have always been aware of Green India Challenge but taking part in this is a great privilege. I wish very best to Shri Joginipally Santosh Kumar in taking this great work forward,” the actor said.

Amitabh Bachchan opined that a noble and great initiative like Green India Challenge requires great participation from across the world and said that he would challenge three more people to take part in the same from his twitter handle.

Incidentally, July 27 is also the death anniversary of India’s greatest scientist and former President of India APJ Abdul Kalam and on many occasions, Santosh Kumar mentioned how Kalam inspired him to take up this challenge and do his bit for the environment.