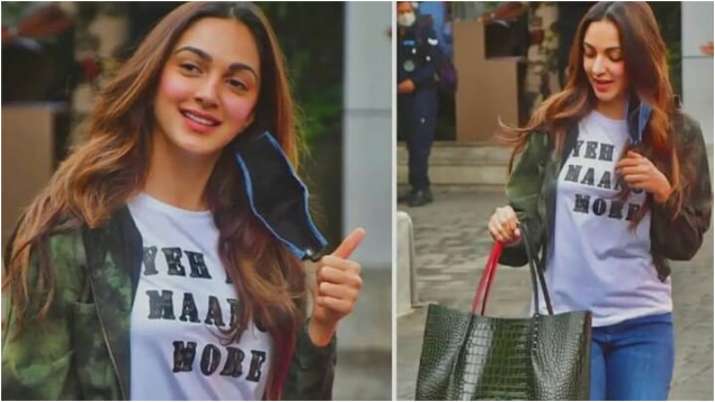 Lately, a video of Kiara Advani has gone viral on social media. The video is from an airport where the actress was asked to remove her mask and confirm her identity. The actress complies with the request of the CISF officer before making her way to the flight. The incident instantly reminded netizens of a scene from Kiara’s film MS Dhoni: The Untold story where she the role of a hotel receptionist. In the film, Kiara’s character fails to recognise sports star MS Dhoni and asks him to confirm his identity. The role of Dhoni was essayed by late actor Sushant Singh Rajput.

Taking to the comment section, a number of users pointed out the similarity between the real life incident and the scene from MS Dhoni: The Untold Story.

On the films front, Kiara will next be seen in the war drama Shershaah starring Sidharth Malhotra in the titular role. Recently, Kiara expressed her gratitude to the brave army men and their families for their support and prayers, as she addressed the Indian Army in Kargil. Portraying the character of Dimple Cheema, the love interest of Vikram Batra in Shershaah that chronicles the Kargil War, Kiara Advani steps into the shoes of a headstrong, independent, modern woman who is regarded as the pillar of support for the brave martyr of the Indo-Pakistan war.

As the team of Shershaah visited Kargil to launch the trailer of the film amid the Indian Army as a tribute to their valour and courage, Kiara Advani addressed the soldiers expressing her gratitude saying, “”Honestly speaking, I’m really nervous today, because it’s for the first time that I’m standing in front of the Indian Army and it’s a huge honour. I don’t think any amount of words would justify the gratitude that we all have in our hearts for each one of you, for all that you do. I would also like to take this moment to thank the families here, salute to you for your support, your prayers and being the true pillars of support for the men and women in the army. There are some films which change you professionally, but then there are films that change you personally, Shershaah is that film for me.”