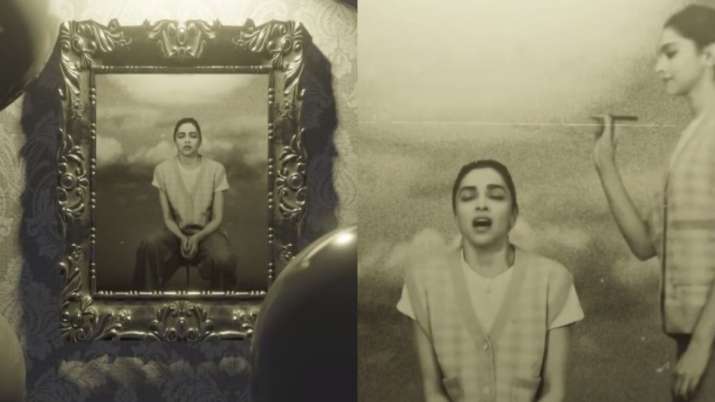 Bollywood actress Deepika Padukone never fails to entertain her fans and followers on social media. From sharing fun videos to aesthetic pictures the actress knows it all. On Tuesday, Deepika took to Instagram and shared a spooky video of herself. The actor captioned the post by sharing a ghost emoji.

In a green-tinted video she can be seen seated with her eyes closed in a photo frame. As the camera inched closer, the frame comes to life and the actor’s twin walked into the frame with a pair of scissors in her hand. She bursts the one seated on the chair and take her place.

Soon after the post, fans and followers bombarded the comments section with their reactions. One of the users wrote, “Yeh kya tha? Yeh kyun tha?” The other said, “Oh wow! That’s so creative! Loved it.” “The cruel laugh at the end, though,” another added. Actors like Vikrant Massey, Arjun Kapoor and Konkona Sen Sharma liked the video.

Earlier, the actress had shared a monochrome picture of herself. The picture had a chiaroscuro effect and she captioned it with a half-moon emoji.

On the work front, Deepika kicked off the shoot of Nag Ashwin’s next film titled Project-K, in Hyderabad. The film will also star Prabhas and Amitabh Bachchan. She shared a picture of the clapboard on Instagram and wrote, “It’s Day 1 at Project-K & I’m absolutely thrilled for what’s coming ahead… #Day1 #ProjectK @nag_ashwin @actorprabhas @amitabhbachchan @vyjayanthimovies.”

She will also team up with Big B in “The Intern”, while “Fighter” casts her opposite Hrithik Roshan. According to reports, she will also be seen in the Shah Rukh Khan-starrer “Pathan”.

India Vs Sri Lanka: T20 series might get cancelled