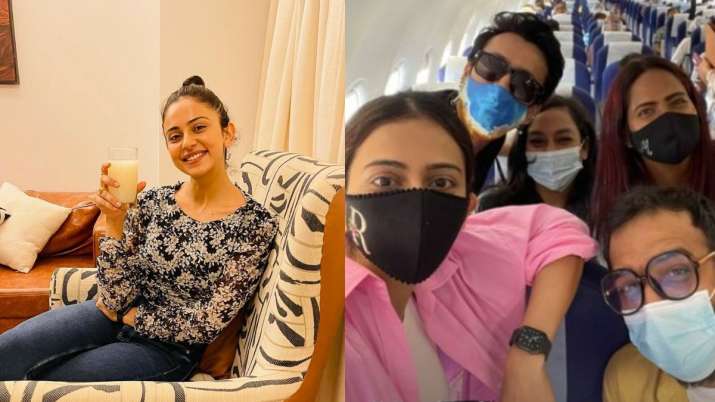 Bollywood actor Rakul Preet Singh has headed to Bhopal to start shooting for her next, an out and out entertainer titled ‘Doctor G’, directed by Anubhuti Kashyap. The ‘Yaariyan’ actor flew out of Mumbai on Tuesday to shoot in Bhopal. The actor also shared a glimpse of her travelling on her Instagram Story.

The upcoming movie also stars Ayushmann Khurrana and Shefali Shah. For the first time, Ayushmann, Rakul, and Shefali will share screen space together which has certainly piqued the curiosity of the viewers. 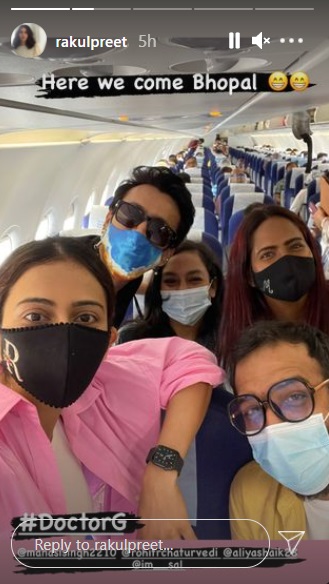 On a related note, Ayushmann has already commenced the Bhopal schedule of ‘Doctor G’. The actor flew to the city of lakes on July 12 and has been actively sharing the glimpses from the shoot on his Instagram handle since then.

The upcoming movie will be based on a campus of a medical institute. While Ayushmann will be playing the role of Dr Uday Gupta, Rakul will be seen as Dr Fatima, a medical student who plays Ayushmann’s senior in the film. Anubhuti, who is director Anurag Kashyap’s sister, will be making her debut as a feature film director with the upcoming project. She has in the past directed the dark comedy mini-series ‘Afsos’ and the critically-acclaimed short film ‘Moi Marjaani’.

The film has been written by Anubhuti, Sumit Saxena, Vishal Wagh, and Saurabh Bharat. In December, Ayushmann had announced the film with a photo of himself posing with the script of the movie. This marks Ayushmann’s third collaboration with Jungalee Pictures, after Bareilly Ki Barfi (2017) and Badhaai Ho (2018).

Apart from ‘Doctor G’, Rakul will also be seen in Ajay Devgn’s ‘MayDay’, co-starring Amitabh Bachchan. Rakul will play the role of a pilot in ‘MayDay’, which is slated to release on April 29, 2022. Rakul also has another movie titled ‘Thank God’, co-starring Ajay Devgn and Sidharth Malhotra, in the pipeline.

Also read: Shilpa Shetty was in tears, shouted at Raj Kundra, ‘What was the need to do all this?’

Meanwhile, Ayushmann has several upcoming projects in his kitty including ‘Anek’ and ‘Chandigarh Kare Aashiqui’.