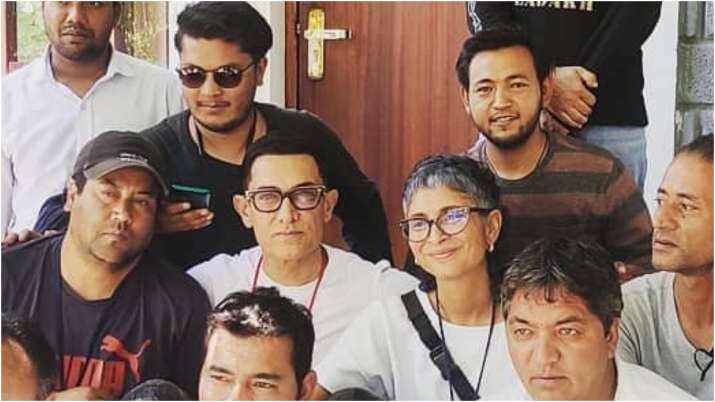 A picture of Aamir Khan and Kiran Rao posing together with the crew of Laal Singh Chaddha on the film set has surfaced on the Internet. In the photo, the celebrities can be seen sitting together in the middle with a bunch of people, seemingly the crew of the film. Some photos also have Aamir posing individually with them. For the shoot, Aamir is seen dressed in casual attire wearing a white t-shirt and sporting reading glasses. Take a look:

Meanwhile, the film Laal Singh Chaddha recently made when headlines, when certain netizens alleged on Twitter that the film unit had littered in the Wakha area of Ladakh while shooting in the region. Soon after, Aamir Khan’s production house denied claims that the cast and crew of the actor-filmmaker’s upcoming film littered Ladakh during an outdoor location shoot in the region.

A statement issued by Aamir Khan Productions (AKP) on its verified Instagram account reads: “To whomsoever, it may concern: AKP would like to clarify that as a company we follow strict protocols for cleanliness in and around our shooting spaces. We have a team which makes sure that the location is trash free at all times. At the end of the day there is a re-check of the entire location. At the end of the entire schedule, we make sure that when we leave a location we leave it as clean, or cleaner than we found it.”

“We believe that there are some rumours/allegations about our location not being kept clean. We strongly deny such claims. Our location is always open to relevant local authorities to carry out checks anytime that they like,” the statement concluded.

Ayushmann Khurrana says ‘Lucky that I chose acting as my profession’