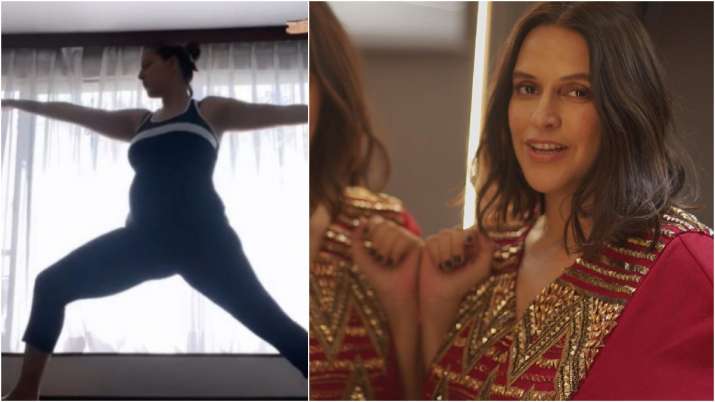 Bollywood actress Neha Dhupia recently announced her second pregnancy. As she enjoys the phase yet again, she took to Instagram to share a piece of practical and doable advice for all moms-to-be. Busting fitness myths, the actress shared that women should continue doing everything they did to keep themselves fit before conceiving. She also gave her fans a glimpse of her fitness regime through the pregnancy and inspiring them to stay fit, she wrote a note for fellow moms-to-be. Neha shared a video of her practicing yoga and revealed that she has been doing all the exercises before conceiving.

She wrote: “They say that everything that you have been practising before your pregnancy is something you should continue with, for the 9 months too. Yoga and meditation is a form of exercise I have been doing for almost 20 years. Of course the body responds very differently now, but staying fit and active is something I would advocate all through. The asanas are very different when you are practising pre-natal yoga and must be done under guidance.”

Neha had announced her second pregnancy sometime back. Taking to social media, Neha had uploaded a picture with actor-husband Angad Bedi and daughter Mehr. Holding her baby bump in the picture, the actress captioned the image as: “Took us 2 days to come with a caption. The best one we could think of was, Thank you, God. #wahegurumehrkare.”

Angad and Neha are parents to two-year-old Mehr Dhupia Bedi. The couple got married in 2018 in Delhi.