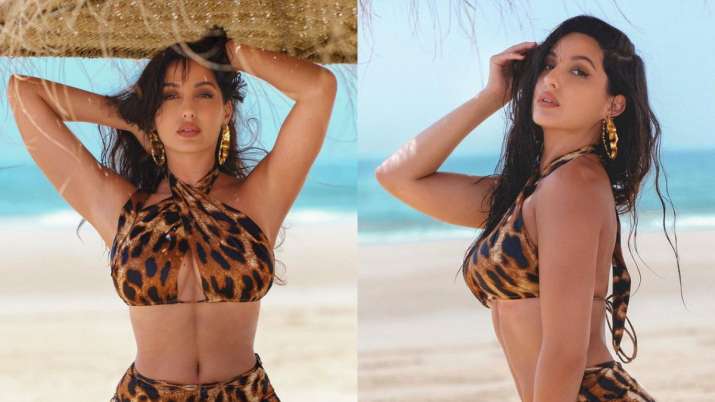 Bollywood actress Nora Fatehi never fails to keep her fans and followers entertained on social media. Giving a testimony of the frenzy worldwide, Nora has hit the 30 Million mark on Instagram, celebrating same, the actress shared her pictures which are setting the internet on fire. She captioned the post: “30 million. We on fiyaaa. Locomotion, we causing a comotion. Love you guys. Let’s gooooo.”

Going by her post, the pictures happen to be from Morocco. Nora is seen donning animal print ensemble, looking absolutely ravishing. Nora and her fans got another reason to rejoice as the actress extended her gratitude to her Instagram family for another milestone.The comments section of her post was filled up with fire and heart emojis from fans

Recently, she has been winning the internet with her recently released song ‘Zaalima Cocoa Cola’.Featuring Nora Fatehi as Heena Rehman, ‘Zaalima Cocoa Cola’ is set in the social and political premise of Indo-Pakistan war in 1971, showcasing the actress in a rustic avatar. Slipping into the character of a spy, Nora Fatehi shared the video on her verified Instagram account. Take a look:

Currently, she is gearing up for the release of her upcoming film ‘Bhuj: The Pride of India’. She has created immense anticipation amongst the fans and followers to witness her slip into the character of a spy, flaunting her unseen facades of versatility.

Impressing the audience with her action avatar and impactful dialogues through the trailer, Nora Fatehi has piqued the interests of critics and audience alike.

Also read: Govinda, Nora Fatehi are here to take away your Monday blues as they dance on Zaalima Coca Cola; watch

The Ajay Devgn-starrer war action film “Bhuj: The Pride Of India” will release digitally on August 13, ahead of Independence Day. The film, directed by Abhishek Dudhaiya, and has an ensemble cast comprising Sanjay Dutt, Sonakshi Sinha, Ammy Virk, Nora Fatehi and Sharad Kelkar in pivotal roles.

“Bhuj: The Pride Of India” will stream on Disney+ Hotstar.