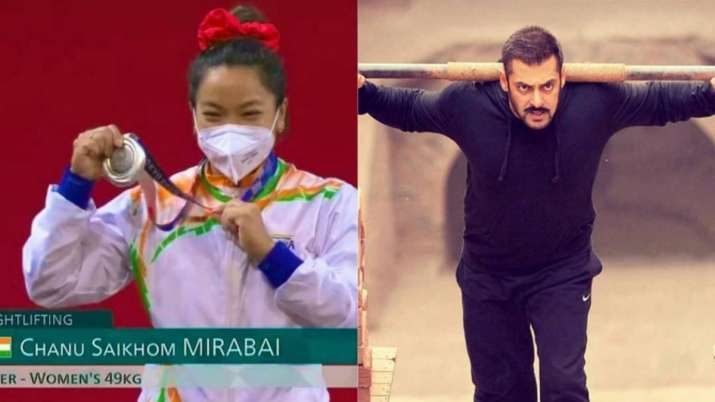 National weightlifter Saikhom Mirabai Chanu did India proud as she won a medal on the first day of the 2020 Summer Olympics on Saturday. The 26-year old bagged the silver medal in the women’s 49-kg category, opening India’s medal account in the mega-sports fest in Tokyo, which was deferred by a year due to the novel coronavirus outbreak globally last year.

While several celebrities have celebrated Chanu’s medal win on various social media platforms, what makes the Radhe star’s post special is that he is her favourite actor. When asked about her favourite actor during one of her earlier interviews, Chanu has named Salman and been quoted as saying, “Salman Khan mujhe bahut hi pasand hai. Unki body structure, sab pasand hai. (I like Salman Khan and his bidy structure)”

Hailing from Manipur, Chanu made India proud and was received a hearty welcome. Manipur Chief Minister N Biren Singh along with his cabinet colleagues, MLAs, officials, her family members, friends and supporters received her at the airport. Mirabai Chanu attended a grand reception function organised by the Directorate of Youth Affairs and Sports, Manipur at City Convention Auditorium just after her arrival at Imphal.

CM Biren Singh handed over a cheque of Rs. 1 crore and an appointment letter to Mirabai to be the Additional Superintendent of Police (Sports) in the reception function where the olympian parents and family members were present. Two coaches of Mirabai, Anita and Brojen were also honoured at the function.