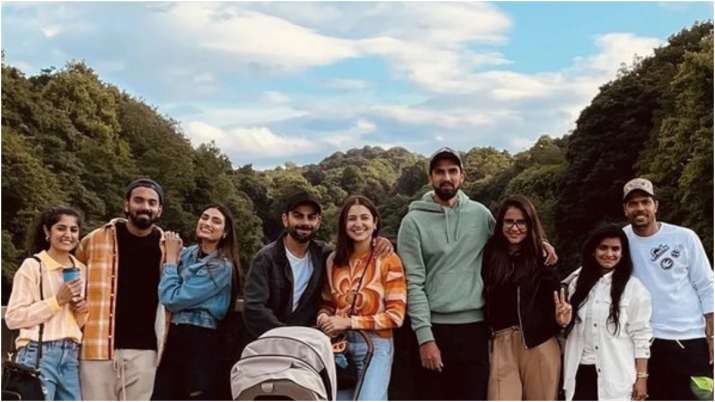 In the first photo, the boys from the cricket team are seen posing against a staircase, while the second picture features these men along with Anushka, Athiya and Umesh’s wife Tanya Wadhwa. “Swipe right,” the caption read, read the caption of the post.

Anushka too shared a picture of the group writing, “Dur’hum’ saath saath hai”.

This is not the first time that Rahul and Athiya were seen together. They often share pictures together and comment on each other’s posts on social media, however, the two have not officially confirmed their relationship.

In April the Bollywood actress had shared a heart-warming birthday message for KL Rahul. Athiya posted a string of pictures with Rahul on Instagram. In the images, the two are seen making goofy expressions as they pose for mirror selfies.

Athiya captioned it: “Grateful for you, happy birthday.” The actress’s father and actor Suniel Shetty commented: “Truly” along with a black heart emoji.

Recently, when Suniel was asked about Rahul and Athiya’s equation, the actor replied, “I think it is best you speak to them. As far as the ad goes… I mean it is an international brand and they chose to take the two of them as the ambassadors. I think they look brilliant together. They are a good-looking couple, na? So, it totally works from a brand perspective. And I must say, they look good together, well, in the ad (laughs!).”

On the work front, Athiya was last seen on screen in the 2019 film “Motichoor Chaknachoor”, a comedy-drama, which also stars Nawazuddin Siddiqui.