This Friendship Day, re-watch these engaging films with your buddies to laugh, cry and bond again 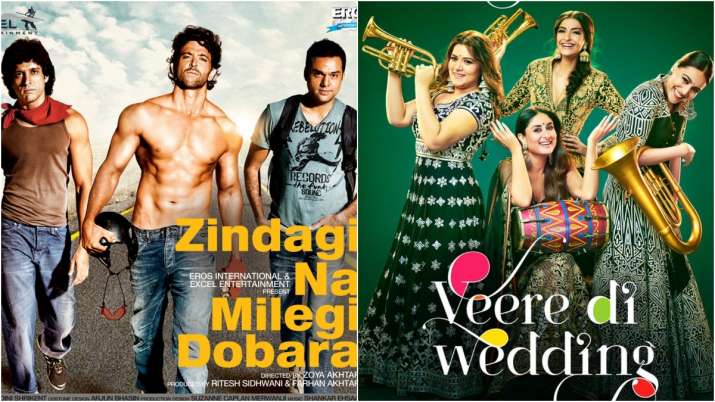 From ‘Dosti’, the first bromance of Hindi cinema to ‘Sholay’ that imprinted the camaraderie of Jai and Veeru in our hearts, friendship continues to inspire cinematic tales some of which have gone on to become enduring classics. This Friendship Day (on August 1), relive the wonder years and all the coming-of-age nostalgia with your friends with our pick of some of the most memorable buddy films.

Most Hindi films about friendship are bromances but in 2018, came this rare story about female friendships. ‘Veere Di Wedding’ was directed by Shashanka Ghosh, produced by Rhea Kapoor, Ekta Kapoor and Nikhil Dwivedi, and starred Kareena Kapoor Khan, Sonam Kapoor Ahuja, Swara Bhaskar and Shikha Talsania. The film was no ‘Sex and the City’ or as path-breaking as ‘Angry Young Goddesses’ but it still tried to tweak mainstream ideas about love, fulfilment and personal freedom and generated a lot of conversations. The premise of a few friends attending a wedding was not new but just the fact that a big budget, mainstream Hindi film actually focused on the stories of four women, their bond and fierce loyalty to each other against all odds was heartening.

Sometimes, all you need is a friend who changes your perspective towards life. Anand is one such story of a doctor whose terminally-ill patient teaches him the lessons of life before breathing his last. This movie is certainly the most unadulterated and plain depiction of human friendships.

Aamir Khan has had the privilege to star in a few definitive films about friendship including ‘Jo Jeeta Wohi Sikandar,’ ‘Dil Chahta Hai’ and ‘Three Idiots.’ And something tells us these films will continue to inspire future film-makers whenever they want to make coming-of-age stories about friendship, love and the quest for meaning and purpose in life. Remember ‘Chhichhore’ ?   Based on Chetan Bhagat’s novel ‘Five Point Someone,’ director Rajkumar Hirani’s ‘3 Idiots’ was not just a regular bromance. It also incisively questioned a regimented education system that drains all  the joy from learning. And of course, it was about three very different young men who learn some of the most profound life lessons in each other’s company. The film was produced by Vidhu Vinod Chopra and also starred Kareena Kapoor, R Madhavan, Sharman Joshi and Boman Irani.

This 2011 road movie about breaking away from the past and finding new horizons with life long friends just turned a decade old but still seems as fresh and contemporary as when it was released. Directed by Zoya Akhtar, this was one of the many films that Excel Entertainment has made about  friendship, including the cult-classic ‘Dil Chahta Hai’ in 2001 and Abhishek Kapoor’s directorial debut, ‘Rock On!!’ in 2008. ‘ZNMD’ boasted an ensemble cast featuring Hrithik Roshan, Abhay Deol, Farhan Akhtar, Katrina Kaif, and Kalki Koechlin and took us on a road trip of a lifetime across Spain. But more than its scenic backdrop, it was the chemistry between the three friends that made the audiences laugh and grow introspective about their own lives. The film made us all think about friends we have lost, those we still have and about a life that is crying out to be lived to the fullest.

This 2020 Yoodlee production tweaked the friendship genre to ask what if the protagonists were not seeking a higher purpose but were in fact ordinary young men, stuck in mediocre lives, just trying by hook or by crook to beat a system that has beaten them? The Ashish Shukla directorial is not an aspirational film but instead asks if aspirations are possible in a society steeped in corruption, greed and violence. Bonny (Raghav Juyal) and Fundoo (Abhishek Chauhan)  are not heroes or even wannabe heroes but they are lifelong friends who will deal with everything life throws at them, together. In a world where they cannot trust anyone, their bond is without question, the most endearing part of the film.  The film also had memorable performances by Sanjay Mishra, Ram Kapoor, Nidhi Singh, Namit Das and Flora Saini. The heist Bonny and Fundoo plan may have gone wrong in the film, but they did get one thing right. Friendship.

Raise your hands if you relate yourself and your gang with the title track of this movie! I guess every single person can relate to the song ‘Dil Chahta Hai’, such are the lyrics. ‘Din Din Bhar Ho Pyaari Baatein, Jhoome Shaamein, Gayeein Raate’. We all wish that we could spend every moment of our lives with our friends, don’t we?