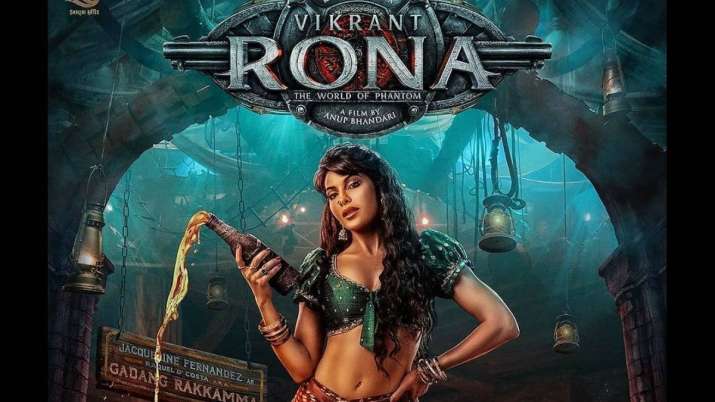 Actress Jacqueline Fernandez has taken the Internet by storm with her intriguing first look from Vikrant Rona, starring Kannada star Kichcha Sudeepa. In the character poster, shared by the actress on Instagram, Jacqueline looks every inch stunning. In the poster, Fernandez is seen in her screen character of Raquel D’Costa a.k.a. Gadang Rakkamma. She wears an asymmetrical red skirt with a green blouse as she holds a bottle in her hand. Sudeepa stands behind her with a gun in his hand. Jacqueline will be seen playing ‘Gadang Rakkamma’ who runs a tavern in a fictional place.

“What Rakkamma doesn’t know, doesn’t exist’ Super happy to introduce my character #GadangRakkamma from #VikrantRona,” she captioned the poster.

Talking about the film, Fernandez said the upcoming film ‘Vikrant Rona’ will be super special and memorable for her. The actress will also be seen shaking a leg with Kichcha Sudeepa in the film.

Talking about the poster unveil, Jacqueline shared: “The team of the film has been very welcoming and every moment that’s going into its making has been exciting for me. I thank the producers for such a grand poster reveal from the bottom of my heart. This film is going to be super special and memorable for me.”

Besides Vikrant Rona, Jacqueline Fernandez has a couple of popular films in her kitty. She has “Ram Setu” and “Bachchan Pandey” coming up with Akshay Kumar and “Kick 2” with Salman Khan. She has also been roped in for “Cirkus” with Ranveer Singh and the multi-star cast horror-comedy “Bhoot Police” is one of her many releases.