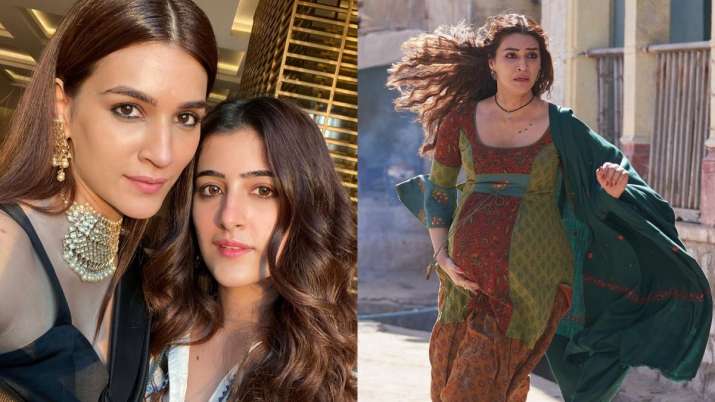 Kriti Sanon who basking in the success of her newly released film Mimi is not just enjoying positive feedback from the critics and audience but her younger sister Nupur Sanon also showered her love on the actress. Nupur shared a long and emotional post on Instagram praising her sister for her performance in the much-acclaimed movie. After watching the movie on Sunday, Nupur posted a couple of still images of Kriti who is essaying the titular role of a surrogate in the movie.

In her soul-stirring post, Nupur termed her sister as “phenomenal” and revealed that she was blown away by what by Kriti’s performance which also made her shed a few tears. “I always knew your true potential. I always knew the level of acting you’re capable of. But I was blown away by what I saw!! You did it, Mimi!! You were phenomenal! My Words won’t be able to describe what I felt. I have laughed and laughed and then cried and cried. There wasn’t even a single scene when I felt you weren’t 100 per cent Mimi !!” she wrote.

Heaping her sister with praise, Nupur said that Kriti has made sure with her performance that nobody after watching her movie will call her as “just a pretty face” in Bollywood. “You’ve forced every single person who has watched Mimi to take the ACTOR in you VERY SERIOUSY. And I’m SO proud of you! And I’m SO Happy for you! You have waited to get a film like Mimi way longer that the 9 month-wait Mimi had to for Raj Take a bow,love! @kritisanon,” she concluded.

The film narrates a quirky tale of a feisty and carefree girl (Kriti) who becomes a surrogate mom to make money. Laxman Utekar has also written the movie’s story and screenplay along with Rohan Shankar, who has penned the dialogues as well.

Apart from ‘Mimi’, Kriti has an impressive lineup of films including ‘Adipurush’, ‘Bachchan Pandey’, ‘Bhediya’, ‘Ganapath’, ‘Hum Do Hamaare Do’ along with another unannounced project.