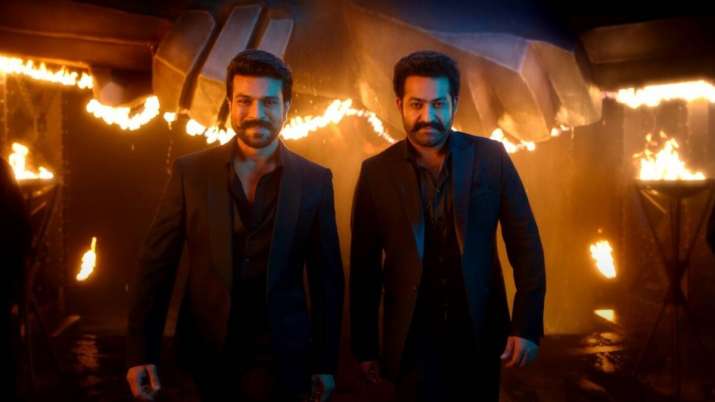 After much anticipation, the makers of the magnum opus RRR dropped the first song of the film on Sunday. The friendship-theme song titled, ‘Dosti’ came as a sweet surprise to the audience at the right time as the world celebrates International Friendship Day today (August 1). The song celebrating the bond of friendship features NTR, Ram Charan, M M Kreem, Amit Trivedi, Anirudh, Vijay Yesudas, Hema Chandra, and Yazin Nizar . The peppy music and the catchy beats of the song make it an exceptional piece of art. The song is shot with a fiery backdrop that gives it an intriguing feel.

Alia Bhatt who is going to portray the role of Sita in the film took to Instagram and informed the fans about the release of the song. Sharing the poster of the song Alia wrote, “On this Friendship day, witness the coming together of two powerful opposing forces – Ramaraju & Bheem #Dosti #Natpu #Priyam Music Video Out Now.”

The project that has raised temperatures, ever since its inception is the most monumental film of 2021 and people are waiting with bates breath to watch the magical world that the Baahubali director has created with RRR.

SS Rajamouli film — “Roudram Ranam Rudhiram” — is said to be one of the costliest films ever produced in India. “RRR” is set against the backdrop of the independence era. The period drama is a fictional account starring Ram Charan and Jr NTR as freedom fighters Alluri Sitarama Raju and Komaram Bheem, who fought against British and the Nizam of Hyderabad.

The film, which is directed by “Bahubali” maker SS Rajamouli, also stars Alia Bhatt and Ajay Devgn, and is slated to release on October 13. It will be released in Telugu, Tamil, Hindi, Malayalam, Kannada and other Indian languages.