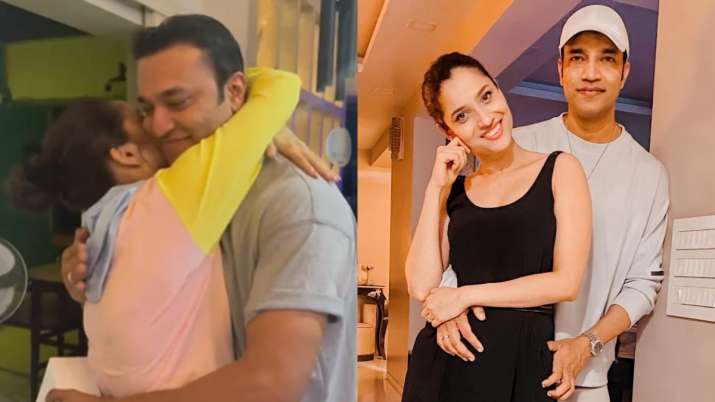 Pavitra Rishta actress Ankita Lokhande celebrated her boyfriend Vicky Jain’s 34th birthday on Sunday. She surprised him with an exciting gift in the most romantic way. Ankita took to Instagram and shared a video where she gave her fans and followers a sneak peek of what she gifted Vicky. Sharing the video Ankita wrote, “Your best years are ahead of you and your best is NOW with ME and I promise I will be there for you at life’s every up and down and the in-between. Happy birthday my man.”

In the video, Ankita is seen in joggers and hoodie with a set of headphones in hand. She asks Vicky to turn around and when he asks for his birthday present, she surprises him with Apple Wireless AirPods. And then showers him with kisses.

The couple celebrated their third year of togetherness on April 10 this year. On this occasion, Ankita shared a video that shows the two of them dancing alongside the caption reading, “Teen saal 3 years of togetherness.”

Her relationship came to the limelight soon after the death of her ex-boyfriend and actor Sushant Singh Rajput last year. There were people who would troll her and pass negative comments on social media. Ankita has a lot of times came out on the public front to bash these people. Not only this, but she has even thanked Vicky for being her constant support.

For those unversed, Ankita and Sushant started dating during their daily soap ‘Pavitra Rishta’ and called off their 6 year long relationship in the year 2016. On the professional front, she made her Bollywood debut with Kangana Ranaut‘s Manikarnika: The Queen Of Jhansi in the year 2019.

On the professional front, Ankita is currently gearing for daily soap Pavitra Rishta 2.0, where she played the iconic character of Archana in season 1.