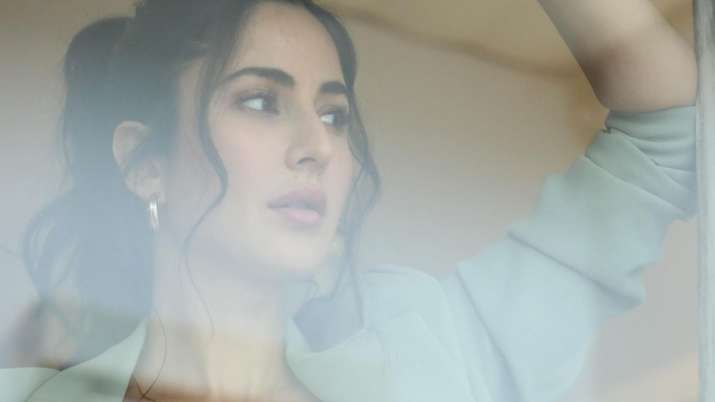 Bollywood actress Katrina Kaif is an avid social media user and enjoys a massive fan following. Undoubtedly, the actress manages to make heads turn with her stunning looks and fashion statements. Now, she has joined the long list of celebrities who embraced the ‘photo dump’ trend on Instagram, wherein they share a carousel of images, with a single caption. Taking to the photo-sharing app, Katrina posted a number of behind-the-scenes pictures and videos from a recent photoshoot and wrote, “Photoshoot bts dump.”

In the pictures, Katrina can be seen striking a stunning pose in her grey blazer paired with a white crop top and denim shorts.

To complete her look, Katrina opted for gold hoop earrings and a gold chain. She tied up her hair in a ponytail with loose curls. In the first clip, Katrina flipped her hair. While in second the actress laughed and enjoyed while dancing.

As soon as Katrina dropped the post, her fans showered love on her, calling her, ‘queen’, ‘flawless’, ‘amazing’ and the ‘Barbie doll of Bollywood’.


On the professional front, Katrina will next be seen in “Sooryavanshi”, starring Akshay Kumar. She also has the horror-comedy “Phone Bhoot” lined up. It has been directed by Gurmmeet Singh and also features Ishaan Khatter and Siddhant Chaturvedi. Her other upcoming film is “Tiger 3” with Salman Khan. They have commenced shooting for the spy thriller, which was put on hold due to the pandemic. ‘Tiger 3’ is the third part of the spy thriller franchise starring Salman with Katrina. The first instalment ‘Ek Tha Tiger’ directed by Kabir Khan released in 2012 while the second ‘Tiger Zinda Hai’ was released in 2017 and was directed by Ali Abbas Zafar.

The actress is also attending script-reading sessions for Sriram Raghavan’s untitled next film opposite Vijay Sethupati.

India Takes Over UNSC Presidency For August, Thanks France