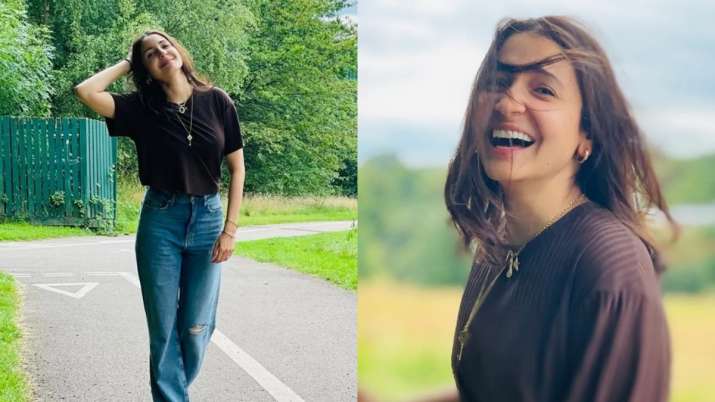 Actress Anushka Sharma and star cricketer Virat Kohli are currently in England. The actress has been sharing pictures from their trip with her fans every now and then. Recently, Anushka summed up her Sunday mood in her latest photos. She gave a sneak-peek into her happy getaway. While the first picture features her million-dollar smile, the other two show her posing in the middle of a road. Anushka opted for a casual and comfy look. She donned a crop top with mom jeans and sneakers.

For the caption, Anushka posted three butterfly emojis. Soon, her post was flooded with comments and love from her fans and followers. Many dropped heart emojis in the comments section.

Check out her photos here:

Recently, Anushka took to Instagram to treat fans with happy pictures of her with her loving husband Virat. In the pictures, she can is seen getting clicked candidly. Anushka Sharma wrote, “Was just casually prancing around town. Running a hand through my hair. A fan spotted me. I obliged for a picture. He seemed happy. Anything for my fans.”

Meanwhile, Anushka and Virat’s daughter Vamika is now six-month-old. The duo celebrated her half birthday by sharing adorable pictures on social media. The actress said her daughter’s one smile can change the whole world around. The first picture showed Anushka playing with Vamika while the second image had Virat holding their daughter and smiling.

“Her one smile can change our whole world around !I hope we can both live up to the love with which you look at us, little one Happy 6 months to us three,” Anushka wrote alongside the image.

On the professional front, Anushka has two films in the pipeline. She will be seen in Navdeep Singh’s “Kaneda”, and a biopic of cricketer Jhulan Goswami. The actress was last seen in the film “Zero” in 2018. She produced the web series “Paatal Lok” and the film “Bulbbul” for OTT last year.