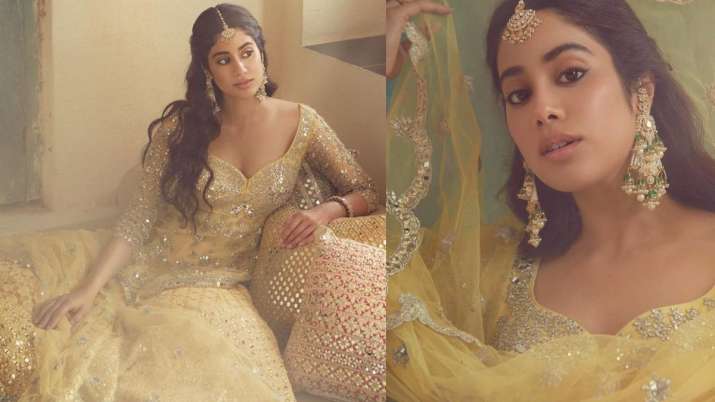 Bollywood actress Janhvi Kapoor never fails to surprise her fans with some funny yet interesting titbits of herself. The actress who enjoys a massive fan following opened up about her dreamy wedding plans. From the venue, decorations to a sane person, Janhvi has decided it all. For the unversed, Janhvi is the elder daughter of late actress Sridevi and film producer Boney Kapoor. In an interview, the actress got candid and spoke about her future wedding, and how she imagines it to be.

Janhvi said that she wants a ‘simple and basic’ wedding that she aims to wrap up in two days. In an interview to Peacock Magazine, Janhvi said she will have her bachelorette party ‘in Capri, on a yacht’ and that her wedding will take place at Tirupathi.

Talking about her pre-wedding festivities including mehendi and sangeet ceremonies, the actress revealed that will take place at ‘a house in Mylapore’, probably referring to Sridevi’s ancestral home. When asked about the reception, Janhvi asked, “Is a reception necessary? No na? Screw the reception then, I will niptau jaldi.”

She also disclosed the outfits that she will be wearing. “Gold and ivory kanjivaram or a pattu pavadai saree on her d-day and pink on her mehendi,” she said.

Janhvi wants to have a simple and basic wedding with mogra flowers’ decoration. She said that her wedding decor will be ‘traditional, but simple, full of mogras and candles’. Also, Janhvi revealed that she isn’t ‘very good at decor’ but that she wants it to be ‘basic’, to the extent that she expects her wedding to be a short affair. “Two days mein I’ll liptao it (I’ll wrap it up in two days),” the actress added.

Describing her husband, Janhvi reacted laughingly and said “I will be marrying a sane human being, because I haven’t met one of those yet.”

On the professional front, Janhvi’s was last seen in horror-comedy “Roohi.” Directed by Hardik Mehta, the film also features Rajkummar Rao and Varun Sharma in the lead. The actress is also expected next to be seen in the upcoming romantic-comedy film “Dostana 2”. Apart from this, she also has period drama ‘Takht,’ co-starring Kareena Kapoor Khan, Ranveer Singh, Anil Kapoor, Vicky Kaushal. Also, she has Anand L Rai‘s ‘Good Luck Jerry’.

India Schedule, Tokyo Olympic 2020: Matches To Look Out For Tomorrow In Tokyo 2020