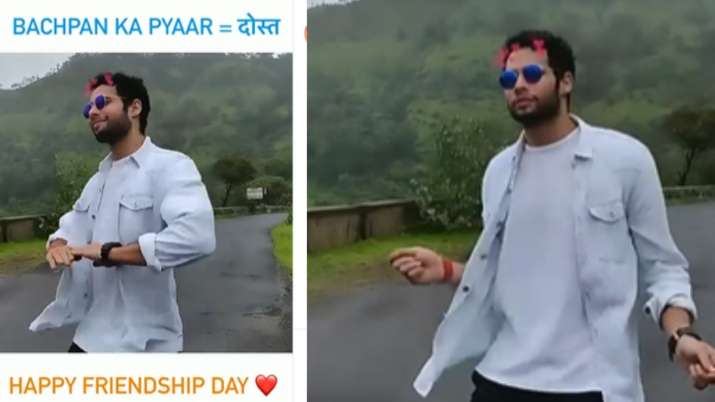 The first Sunday of August is observed as Friendship Day every year. In times of pandemic when going out and meeting your friends is a constraint, people took to social media to let their friends know how much they mean to them. Recently, Bollywood actor Siddhant Chaturvedi on Sunday shared a hilarious Friendship Day post on social media where he is seen grooving to the viral ‘Bachpan Ka Pyaar’ song. This Friendship Day, Bollywood celebrities have taken to Instagram to celebrate friendship in their unique ways!

As the whole country grooves to the viral song ‘Bachpan Ka Pyar’ sung by a little boy named Sahadev, the song seems to be getting popular across Bollywood as well. After Anushka Sharma shared the meme on the same on her Instagram, it’s ‘Gully boy’ actor Siddhanth Chaturvedi who took to his IG reels to share a hilarious clip where he could be seen vibing to the song and making dramatic gestures with his friends.

Netizens flooded Siddhant’s post with hilarious reactions and a string of ROFL emoticons.

For the unversed, ‘Bachpan Ka Pyar’ song is currently one of the most trending videos in India, making a little boy Sahadev who sang the song- an overnight star. Since being shared on social media on July 3, the viral video has got over 9 million views along with 4.5 million likes on Instagram.

On the professional front, Siddhant will be next seen in ‘Yudhra’. The actor will also be seen essaying the lead alongside Deepika Padukone and Ananya Panday in Shakun Batra’s next untitled venture. Siddhant will also feature alongside Katrina Kaif and Ishaan Khatter in ‘Phone Bhoot’. Helmed by Gurmmeet Singh, ‘Phone Bhoot’ is produced by Farhan Akhtar and Ritesh Sidhwani.

It is written by Ravi Shankaran and Jasvinder Singh Bath. Talking about the first poster, it featured the three actors all dressed up in suited attire all set for action. This is the first time when fans will see Katrina, Ishaan, and Siddhant together on the big screen in a movie that promises to be a fun ride.

He also has “Bunty aur Babli 2” in the pipeline.